Both Timothy Dudley-Smith and Brian Wren began their hymn writing in the 1960s. Timothy Dudley-Smith’s book is a selection of thirty psalm-based hymns written throughout his hymn writing days. Brian Wren’s book is a collection written between 2009 and 2012, containing thirty-nine texts, nineteen of them psalm-based. Differences in writing style between the two may partly be explained by the years in which the texts were written.

Dudley-Smith’s texts are mainly formal in style. They tend to be a paraphrase of the psalms, with inversions and an older style of language. So the fourth verse of his hymn based on Psalm 107 reads, ‘In weight of sin laid low, by sickness sore oppressed, the weary still his welcome know and taste his promised rest’ and the text for Psalm 41 begins, ‘Lord, may our hearts within us burn and grant us grace to intercede,’ firmly traditional words. Yet in his hymn based on Psalm 19, written in 1970, the opening verse states, ‘The stars declare his glory … in all created things, and through the silences of space their soundless music sings,’ and his well-known text from 1968, I lift my eyes to the quiet hills, based on Psalm 121, is timeless with its ‘press of the busy day’ and ‘the calm that is mine to share’ and the vision of those ‘quiet hills’ that are still havens in times of stress. 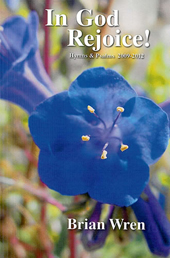 Wren’s hymns are eight original works and eleven texts adapted from Isaac Watts’ psalm-based hymns. This makes an interesting mix of language and style. The Watts-based texts retain the flavour of the original, but with current problems ironed out, such as gender issues, political correctness and Watts’ tendency to Christianize the Psalms. Those texts entirely written by Wren often have a different flavour. His opening line to Psalm 23 states, ‘While other shepherds fleece the flock … ‘ and his text on Psalm 96 tells us, ‘All idols are hollow, with negative worth, but God in a heartbeat made heaven and earth.’

The two books only have six psalms in common. They are 8, 27, 32, 107, 121 and 130. Comparison is difficult, as in Wren’s case only Psalm 8 is his original text, the other five are Watts’ based. However, there is contrast in the treatment of this one psalm. Dudley-Smith uses the more conventional, ‘His fingers set the moon in place, the stars their Maker’s hand declare,’ and ‘we his children tell his worth,’ whereas in Wren’s version the second verse begins, ‘When I see with wonder on a starry night, worlds that take a million years to send us light …’ and he includes ‘sounds of babes and toddlers’ in his group of worshippers.

Space prevents it here, but these books deserve to be studied together, not just to compare and contrast texts, but also to discover new hymns to sing and new tunes to accompany them. There are many riches to explore.

[Ed. See also David Lee's version of Psalm 130, Out of the depths I cry to you, O Lord published on Singing the Faith Plus. If you are interested in Isaac Watts' psalm paraphrases, you may wish to investigate In Melody and Songs: hymns from the psalm versions by Isaac Watts (Darcey Press).]