Saint Patrick - who was he? 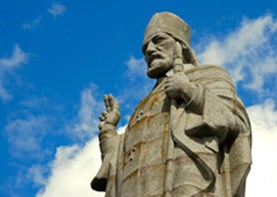 “I am a sinner, a simple country person, and the least of all believers. I am looked down upon by many.” Find out about Ireland's patron saint and then discover Hymns for St Patrick.


Patrick is one of the few Celtic saints whose accent we may discern from personal writings – his autobiographical Confessio (written, he tells us, as an old man) and his angry Letter to the soldiers of Coroticus, followers of a British warlord who invaded Ireland and killed or abducted a great many Christians that Patrick had recently baptised. The letter vividly expresses the depth of pain Patrick feels that the “sheep around me are mangled and preyed upon” but is also revealing about his relationship to the Irish people and his mission towards them.

“I live as an alien among non-Roman peoples, an exile on account of the love of God . . . Is it just from myself that comes the holy mercy in how I act towards that people who at one time took me captive and slaughtered the men and women servants in my father's home?”

Patrick, like St Paul whose voice he seems to echo, was born a Roman citizen – his birthplace being variously identified in locations as far apart as Cornwall and Kilpatrick (meaning “Patrick’s church”) on the River Clyde. His father was an estate owner and a Christian deacon, though Patrick himself had little interest in religion. As a teenager he was taken into slavery by Irish raiders and worked as a sheep and pig herder for six years, during which time he turned to God and became devoutly religious. Eventually escaping back to his home, he was eventually ordained a deacon himself and subsequently a priest.

Patrick writes of a dream in which a messenger gave him a letter begging him, a “holy youth”, to return to Ireland as a leader. In fact, it seems that, while absent abroad, he was chosen by British Christians - though some regretted his incomplete education - to return to Ireland, this time as a missionary bishop. It was a commitment he lived out until his death. His mission is usually dated from 432 AD but may have begun much later, and though he didn’t bring Christianity to the island (it seems likely he was preceded by Palladius), he came to be regarded, like St Paul, as a formative pioneer of the faith. He credited himself with thousands of converts. 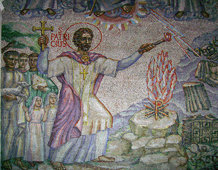 Famously, it is said that Patrick lit a fire on the hill of Slane in County Meath, marking the dawn of Easter and pre-empting a druidic rite on nearby Tara in contravention of a ruling by the high king, Lóegaire mac Néill. In so doing he was inviting a confrontation out of which he secured the right to continue his missionary work. Whether true or not, the story symbolises the opposition Patrick faced spreading a young religion amongst frequently unreceptive people. He was single-minded, cannily bribing tribal leaders to let him travel in their regions while at the same time persuading their womenfolk to convert to Christianity and adopting their sons as companions and students.

Patrick lived continually on the edges of society, expecting opposition and likely death, but responding with legendary defiance. When his charioteer Odrán was killed by Lóegaire’s nephew Núadu, in an action designed to test the extent of Christian forgiveness, Patrick brought a case against Núadu, demanding his execution but granting God’s mercy on his soul. Credited with banishing snakes from Ireland, Patrick’s work was, in fact, to banish perceived evil. In practice that meant overcoming dominant pagan cults such as that surrounding the fertility god Crom Cruach.