Streets are filled with many people (A Living Pentecost) (website only)

Streets are filled with many people, voices raised in every tongue,
Bring first-fruits of their harvest, gift to God from old and young.
In the midst of celebration, comes a new unsettling sound:
A cacophony of praising, Word alive, Spirit unbound!

God is here, speaking our language, speaking as we do,
Christ alive, here in Spirit, and turns the tables, upsets conventions,
Brings a new church to birth, today a living Pentecost.

Mighty wind blows through the city, sweeps a new age into birth,
Holy fire to burn the boundaries, and ignite God's work on earth.
Aramaic, Persian, Coptic, Parthian, Arabic and Greek,
Heard and understood and spoken, God in multi-lingual speak!

Wake up call to every nation, chaos melts, new paths made plain,
Harvest now for new creation, these the first-fruits of Christ's reign.
We, God's Church, arise for action, move in faith to break new ground,
Spirit, take us to the margins where your living work is found. 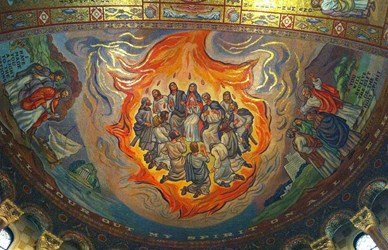 Clare and Raj's hymn not only captures a sense of the air of celebration in which the Pentecost events took place, but challenges and refreshes our understanding of a familiar Christian story. It does so with some striking phrases: “burn the boundaries”, “multi-lingual speak”, “cacophony of praising”, and an allusion to the Holy Week story of Jesus upturning the market stalls in the Temple precincts.

How might you create a “cacophony of praising” in your Pentecost worship? Might this hymn inspire an all-age event – flags, percussion, shouts of praise in a variety of languages? What might “turning the world upside down” look like in the context of a worship service? How may we create an atmosphere of challenge as well as celebration?

Noting that “turning the tables” is a much-used idiom, Clare writes that “Pentecost was about turning conventions on their heads". The phrase “turns the tables”, used in the hymn’s chorus, echoes Jesus’ recognition of “the need for the overhaul of the whole system, to shake people out of their routines and complacency.” 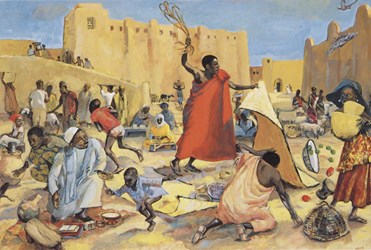 In this way, A Living Pentecost makes connections between Jesus’ provocative actions in Holy Week (driving out the merchants from the Temple precincts, see left) and Pentecost: neither were welcomed with universal joy. “Once again, the authority of the Temple and the way that the people were pursuing their faith was being challenged to the very core. Turning the tables resulted in the authorities pursuing Jesus to his death. Soon after Pentecost they were pursing Christians for their new found faith.”

Nothing would be the same again, say Clare and Raj. The disciples had been, to that point, inward-looking, consumed by anxiety, and unsure how to more forwards, but on the Day of Pentecost God took them into a place of new confidence with words to say, and a faith to declare to the whole world. In a very real way, God has ignited his mission in that moment. “Holy fire to burn the boundaries, and ignite God's work on earth”, they write (v.3).

Raj adds that Pentecost challenges us to ask who sets the boundaries in our society, “boundaries like ‘chosen’ and 'gentiles'”. God’s holy fire consumes such boundaries in a controlled way, “trying to build a just and equal community, where everyone is included and accepted. In that context ignite is a word to begin that process and also a way forward.

Clare describes the music of the verses as suggesting a “gentle stirring in a minor key, reflecting the unsettling nature of the event itself. They build up towards the chorus, as excitement must have built on the day itself. The chorus is in a deliberately positive major key.”

A Living Pentecost was first sung at a Manchester and Stockport District service in 2019, presented by a large choir in Clare’s own three-part arrangement. However, she writes that it was always her intention that its life would be as a congregational song. “I hope that the relatively easy to sing tune would encourage others to experiment in building the atmosphere and excitement of Pentecost.” 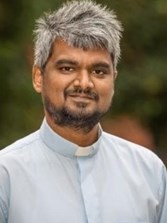 Raj Bharath Patta is an authorized Lutheran Minister serving Stockport Methodist Circuit. He writes on his blogspot that his family name, Patta, “reminds me of our roots, our strong and proud Dalit Christian roots, for once we were no people, but God called us and made us God's people”. http://thepattas.blogspot.com/ 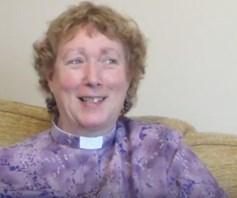 Clare Stainsby currently serves as the superintendent minister of the Salford Methodist Circuit. She began her ministry in 2002 after working for several years as a music teacher. She moved as a minister to Salford in 2015, and became superintendent in 2017.