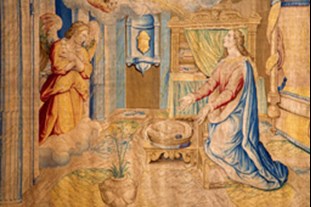 "You shall give him the name Jesus, for he will save his people from their sins"

The name of Jesus first was told to Mary when she heard
That she would bear the Son of God, who’d save and rule the world.

The name of Jesus was revealed to Joseph as he dreamed
And learned the child was “God with Us”, by whom we’d be redeemed.

The name of Jesus was bestowed when he was circumcised.
In flesh like ours his bleeding showed that he would someday die.

The name of Jesus is the one by which we must be saved.
For only he died for our sins, then rose up from the grave.

The name of Jesus will be known as peace defeats the sword.
All knees will bow, all tongues confess that Jesus Christ is Lord.

Because the scripture references chosen by Mary Rose Jensen neatly sum up the Jesus’ earthly life in short, accessible verses, this is a hymn to which we can return on a number of occasions during the church year. It is a hymn for Advent (especially vv.1&2); Ascension or Christ the King Sunday (v.1&5); Candlemas or New year (v.3); Easter (v.4).

Consider planning a service around an overview re-telling of the life of Jesus, using this hymn as a starting point and then drawing upon other hymns in Singing the Faith and on StF+ to focus on different stories and incidents in his life. To help you, see our series on The ministry of Jesus.

Mary Rose Jensen says that she wrote this hymn “because there are not very many hymns for the circumcision of Christ, which is often remembered on New Year’s Day. Some of the content is from our pastor’s sermon on the circumcision and naming of Jesus, preached on 1 January, 2015.” (Also see Marking Candlemas – the feast on which Christians recall the presentation of the baby Jesus at the Temple in Jerusalem by his parents.)

In fact, this song took as its starting point the tune, a traditional English carol, possibly going back to the time of Shakespeare, that was often sung on New Year’s Day with words that begin “The moon shines bright”. The tune is called either “The Bellman’s Song” or “Waits’ Song” but, because there is another tune that is also called “Waits’ Song”, Mary Rose has followed the example of The Oxford Book of Carols in calling it “The Bellman’s Song”. Having found her tune, Mary Rose explored scripture passages about the name of Jesus, a name derived from the Hebrew word meaning “saviour”. Mary is told to name her son Jesus “for he will save his people from their sins” (Matthew 1: 21). 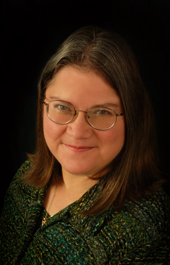 “My hope”, says Mary Rose Jensen, “is to write music that is useful to the church, especially for worship, and that teaches sound doctrine.” In this intention, and in her particular interest in writing for young people, Mary Rose follows in the path of Cecil Frances (Fanny) Alexander (e.g. There is a green hill far away; All things bright and beautiful)

Mary Rose lives with her husband, Mark, near Houston, Texas, USA. She grew up in the United Methodist Church in Illinois and trained as an ICU nurse, eventually becoming unable to work due to chronic illness. This coincided with Mary Rose beginning to write songs for the children’s choir at her church. At the same time, dissatisfied with the recorded music she was finding for her own two young children, she and Mark established Garden Rose Music in 1991 in order to publish Songs of Joy, a print and recorded music project designed to teach children the basics of the Christian faith.

Mary Rose’s output includes hymns, choral anthems and settings of scripture and liturgy that are sung in many parts of the world. "Recent correspondence includes contact from an Orthodox choir in Canada that is singing my setting of a piece of Eastern liturgy; an order of nuns that asked to include one of my psalm paraphrases in their upcoming prayer book; and the director of the English choir of a cathedral in Beijing, China, that is singing one of my Christmas anthems."

For more about Mary Rose’s writing and recording: Garden Rose Music includes information about Songs of Joy; and her My Score Exchange profile page includes her most recent music.