This is the day

StF+ explores the importance of the hymns in Singing the Faith headed Sunday: The Lord's Day. 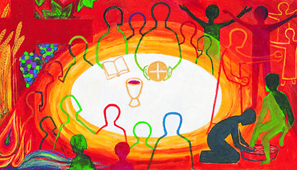 I was always a little curious, as a boy, as to why we would seek out a church to attend while on our summer holidays. Seemingly, Sunday morning was still about going to church, however near to the beach we were. (And, for my Dad, so was Sunday evening.)

Curious – but accepting… I didn’t question this habit, tradition, priority. But why, as the hymn has it, is ‘this’ the particular day that the Lord has made? And why does Sunday sometimes take the title “The Lord’s Day”, as it does in Singing the Faith?

Sunday, in local church congregations, is usually experienced as being synonymous with the “worship day”. It’s a day of social and public worship that draws particular attention to the activity of Jesus and our response to it. (See, for example, Fred Pratt Green's God is here! As we his people, StF 25.) 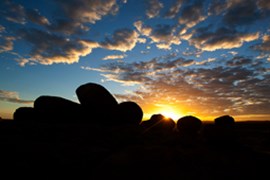 The dawn of creation - a first day event © 2014 Thinkstock UK, a division of Getty Images

However, the very day itself has also been seen as an important expression of Christian faith. Traditionally the first day of the week, Sunday recalls two key faith events.

For both those reasons, by the time John came to write the last book of the Bible, his Revelation, he knew the first day of the week to be “the Lord’s Day” (Revelation 1: 10).

Magnificently, Charles Wesley draws the two themes of creation and resurrection together in the opening verse of Come, let us with our Lord arise (StF 148); at the same time explicitly identifying God and Jesus as one and the same:

Come, let us with our Lord arise,
our Lord, who made both earth and skies:
who died to save the world he made,
and rose triumphant from the dead.

That this is the Lord’s day on which all “may feel his resurrection’s power”, Wesley writes, is what draws us together to hear God’s word and “fill his courts with songs of praise”. 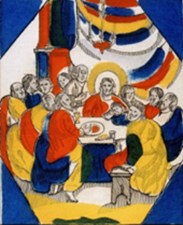 Similarly, David Mowbray also says that, symbolically, creation’s beginnings and Christ’s resurrection are both first day events (First of the week and finest day, StF 149). But he, like Isaac Watts (This is the day the Lord has made, StF 151), also reminds us that the day of Pentecost (Acts 2:1 ff.) is traditionally held to have taken place on the first day of the week (v.3). Because of these past events and because of present gatherings, he argues, “to meet, to learn, to give, to pray… In truth, this is the Lord’s own day!”

The term “Lord’s Day” became a Christian term for the first day of the week by the end of the first century. It was some time later that the term “Sunday” was adopted by Christians, who compared Christ rising from the dead to the rising of the sun. This was also the day on which bread was broken and shared, remembering Jesus’ Last Supper with his disciples (Acts 20: 7-11).

This is the kind of remembering that, as Will Willimon puts it, means “to wake up, to open your eyes, to call to mind, to renew or reawaken. Remember who you are.”

John Bell also alludes to Pentecost in verse 3 of This is the day of rest (StF 150):

This is the time of change
delivered by God’s Spirit
moving to life and health
those claiming little merit.

However, it is the opening idea of Sunday as a day of rest (something that didn’t become commonplace for Christians until Emperor Constantine made it so in A.D. 321) that sets the tone for this hymn. Primarily, says John, the Lord’s Day lays emphasis on being together, sharing food (through Communion) and allowing ourselves to be changed:

change which must overflow
in justice and forgiving.

It’s an emphasis picked up by Ian Worsfold and Paul Wood elsewhere in Singing the Faith when they invite us to look “beyond these walls of worship” (StF 547) and to ask ourselves whether, “in the times of work and rest”, we will display God’s love for all “far beyond the Sunday call”. 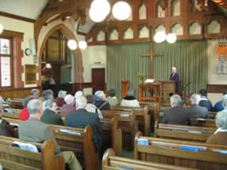 James White suggests that how Christians spend their time is an important indication of what they believe. Remembering – and enacting – events in the past (such as the Last Supper and the resurrection of Jesus) are an important way, even in the New Testament, of anticipating the future and God’s hopes for it. Such memories, like the opening verses of Genesis, are not just stories to be re-told, but statements of faith. When we gather together on the Lord’s Day, we signal to communities around us that these stories/faith statements are alive and being enacted through us.

By singing any of these five hymns, tucked into The Lord’s Day section of Singing the Faith, we are proclaiming our belief in:

In other words, we are singing the absolute fundamentals of Christian faith, from which all else leads.