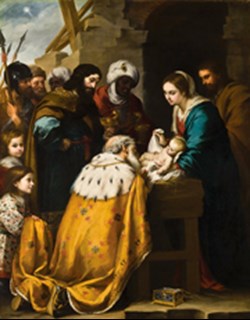 We three kings of Orient are
Bearing gifts we traverse afar
Field and fountain, moor and mountain
Following yonder star

Born a King on Bethlehem's plain
Gold I bring to crown Him again
King forever, ceasing never
Over us all to reign

Frankincense to offer have I
Incense owns a Deity nigh
Prayer and praising, all men raising
Worship Him, God most high

Myrrh is mine, its bitter perfume
Breathes of life of gathering gloom
Sorrowing, sighing, bleeding, dying
Sealed in the stone-cold tomb

Words out of copyright; music widely available online and printed sources, including Mission Praise. See below for a contemporary version.

"Lost in transit – three kings from the Orient"

Singing the Faith Plus received the following message from a site user who was hoping to use this carol in his Epiphany worship for January 2018:

“Please can someone tell me why the popular Christmas carol “We three kings” is absent from modern hymnals? I sang it as a youngster in Sunday School but cannot find it in Hymns & Psalms or Singing the Faith. Is its problem the theology?”

This got us thinking. The carol was written in 1857 by the Revd John Henry Hopkins for the General Theological Seminary in New York City as part of their Christmas pageant, and has been described as “the first Christmas carol originating from the United States to achieve widespread popularity”. That popularity has undoubtedly been helped by the vaguely Oriental tune (also written by Hopkins) which underpins the story of wise men from the East. (Listen to Rob Newton’s contemporary version, which brings out this quality of “Eastern-ness”.)

So why has this carol, often remembered from childhood, failed to make it in to modern British hymn books? It can’t be on theological grounds since, as Methodist minister Norman Wallwork points out, its themes are taken up in similar form in the hymn Bethlehem of noblest cities (StF 225). Here, in admittedly more succinct fashion, “Eastern sages . . . make oblations rich and rare”:

Editors may have found a problem with maintaining the popular idea, not found in the Bible, that the visitors from the East were kings, as in the painting above: "Adoration of the Magi" by Bartolome Esteban Murillo. (In some versions of the carol, the kings are even named, encouraging the singing of the middle three verses as male solos.) Nor does the Bible identify three well-travelled visitors, only three gifts.

The carol’s popularity in the UK seems to have arisen from its inclusion in the Oxford Book of Carols, popular with choirs, rather than in any hymn book. The 1933 (British) Methodist Hymn book didn’t include it, for instance. Was it because it was also regarded as a "teaching" hymn aimed at children? Douglas Galbraith notes that HymnQuest records its inclusion in nearly 50 titles, among them Mission Praise, “but in this list carol books and books of children's hymns are to the fore, including the School Hymn Book of the Methodist Church (1950)”. He adds: “It is more of a carol than a hymn, and none the worse for that.”

In the end, the carol’s absence is more likely to be for reasons of language (arguably dated), balance (you could fill a hymn book entirely with Christmas hymns if you had a mind to), and, in the case of Singing the Faith, most especially a desire to draw from items that were published after the compilation of Hymns and Psalms and which reflect the wealth of new carols and Christmas hymns available.

All that said, adds the Revd Mark Rowland (StF+’s Faith and Order rep), “this shouldn't stop your correspondent using it in worship as it is out of copyright so he could have it printed or projected.”