Who is this, whose face shines brighter (website only) 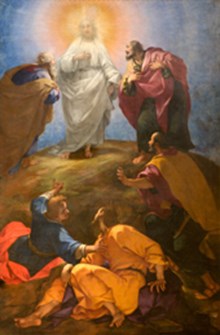 The transfiguration of Jesus © 2015 Thinkstock UK, a division of Getty Images

The Transfiguration according to Mark

Who is this, whose face shines brighter
than a thousand summer suns?
Who is this, who speaks with prophets,
preachers, leaders, ancient ones?
This is he, who won’t seize power,
sets his face to suffering.
Listen! This is God’s Beloved!
Hear him! Serve him! Follow him!

Who is this, who feeds the hungry,
opens eyes, and drives out pain?
Who is this, who casts out demons,
frees the cursed from every chain?
To the powers, he stands defiant,
to the outcast, opens arms.
See him! This is God’s Beloved!
Watch him! Serve him! Follow him!

Who is this, whose footsteps echo,
calling us down city streets?
Who speaks truth to power, and ever
power displays when washing feet?
Always healing, always asking,
“Do you know yet who I am?”
Kneel before the Lord’s Beloved!
Rise and serve him! Follow him!

The shortest section in Singing the Faith is the selection of three hymns focusing on Jesus’ transfiguration: his mysterious mountain-top encounter with Moses and Elijah, witnessed by just a handful of his closest disciples. (See Events in Jesus’ life).

Here, Vince Gilbert offers a welcome addition to that collection, using as his starting point the account in the Gospel of Mark (Mark 9: 2-9), and also referencing the preceding conversation on the road to Caesarea Philippi, during which Jesus asks his disciples: “Who do you say I am?” (Mark 8: 27-38).

The answer was provided right at the beginning of Jesus’ ministry, as he was baptized by John: God’s Spirit descends on Jesus, “and a voice came from heaven: ‘You are my beloved Son; in you I take delight’.” (Mark 1: 9-11). But for Jesus’ followers, then and now, it takes a lifetime to come to grips with what this means in practice.

Vince extends the theme of incomprehension so often expressed by those who saw Jesus at work – not least, his own disciples – and alludes to the many gospel stories of Jesus healing those who were suffering physically and psychologically. 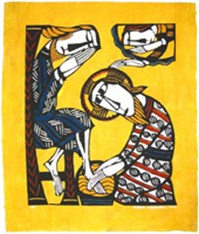 More than that, this hymn also reminds us that Jesus often acted in unexpected ways in order to express in deed as well as word the way that God intends for us to be with each other and God’s world. Jesus is someone who “who won’t seize power” (v.1) but, rather, “sets his face to suffering” – as on the road to Caesarea Philippi – and will demonstrate his role of divine servant by washing the feet of his friends (v.3) (see e.g. John 13:1-17).

Only by listening to, watching, and kneeling before Jesus, Vince suggests, will we be inspired to follow the road God intends.