Chords for guitarists and others 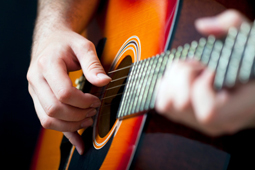 For some time now, with the support of our colleagues at Coventry Methodist Central Hall, StF+ has been adding chord sheets for guitar players and others to our hymn posts.

New additions have been on hold for a while, but our list of chords has now been updated - 169 hymns catered for so far, often with two versions: a concert (original key) version and an alternative capo version for guitar players.

This list will be updated as more sheets are added. It includes only those hymns for which we have posted the new chord sheets. It does NOT refer to other hymns printed in Singing the Faith that may also include suggested chords (see note below**).

For copyright reasons, some sheets include the text of only one verse (and/or chorus) of the hymn.

Want chords for another hymn?

As we now work to increase the number of sheets on the site, it would be helpful to know which ones would be most usfeul to you. Let us know at stfplus@methodistchurch.org.uk. The work of producing these sheets is done voluntarily, so it may take a little while for your request to be processed. Please bear with us!

For hymns where chords have already been included in the printed editions of Singing the Faith, there may be some differences between the chords on the chord sheets and those in the book. These may be corrections of mistakes in the book, but sometimes the sheet compiler has reverted to original chords if there has been a rearrangement in StF. Additionally, the key has been changed in one or two songs, usually just by a semitone to suit e.g. trumpet/saxophone.