Christians together in Basel

In September 2018 representatives of Protestant Churches in Europe assembled in Basel.

150 Lutherans, Reformed Christians, Methodists, Waldensians and   Hussites spent 5 days together in the city where Erasmus is buried and  Karl Barth was baptised.

What did they do? They worshiped, talked, and ate together. They addressed major developments in Europe including the increasing religious pluralism that has come with increased migration and the rise of popular nationalism.

The theme of the Conference was Liberated, connected, committed: A Christian Response to the Challenges facing Europe. 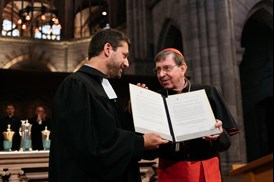 On the Sunday morning an alpine choir sang a yodelling liturgy and alphorns played in the background when the elements were distributed. In this act of worship an agreement was signed between Catholic and Protestant churches. Here you can see the signatories, Cardinal Koch (Pontifical Council for Christian Unity) and Mario Fischer (new General Secretary of CPCE).

There was fun as well and the Assembly ended with a banquet on a cruise boat on the Rhine.

tterbuck was our representative to the 8th General Assembly of the Community of Protestant Churches in Europe. You can read Richard's full report here

Back to The Ecumenical Blog