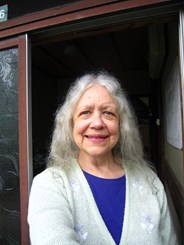 Sheila Norris taught Christianity and English at Kwassui Women's College between 1985-2022 before joining Global Relationships as the Partnership Coordinator for Asia and Pacific.  The College is  one of the oldest institutions for women's education in Japan, founded by American Methodist missionaries 130 years ago. Sheila worked as part of a team in the Religious Affairs Section and was involved in leading and speaking at weekly services of worship and occasional ceremonies, as well as working with small groups of students and graduates for Bible study. Go to the Japan page here

Listen to this interview with Sheila on the 70th anniversary of Hiroshima and Nagasaki bombings.

We have been able to start a discussion group for short term foreign exchange students based around the content of the weekly chapel services - one of the Chinese students asked, 'If I attend this class will I become a Christian?' Well, it isn't a requirement…but some students do!

What has been your greatest challenge?

The challenges are many, but other than the Japanese language, especially in its written form, the greatest ones include remaining cheerful and faithful when there is very little visible progress, and finding the right balance between respect for the ways that are acceptable in the local culture on the one hand and the fact that as a foreigner I have more freedom to speak out than may be appropriate for my Japanese colleagues on the other.

What impact do you feel you have made?

I don't know exactly what God is doing through me; I have come into contact with thousands of young Japanese women over the years, some only through words preached in chapel, some on a regular and continuing basis, but the work is that of sowing seeds and praying for an eventual harvest. What I do know is that any time I have been ready to give up, there has been a very clear sign that there is continuing work for me to do here, and some form of encouragement to go on.

How do you think God is guiding you in your work?

Often by the details of time and place that lead to the opportunity to say or do something, by thoughts that come at the right moment, and by the questions and comments of my colleagues and the students I teach which lead to opportunities to share the gospel.

What has surprised you most of all?

In the churches, the fact that everyone "signs in" to worship, that the order of service, while varying slightly from church to church, is fixed for any given church, and that one minister for one church is the norm. In society in general, the fact that everything starts from April 1st - this includes the academic year, but also most new employment and changes in posts.