How small a spark has lit a living fire! 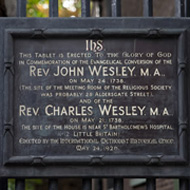 The hymn’s final word, ‘Aldersgate’ refers to Aldersgate Street in London where John Wesley had his conversion experience on 24 May, 1738. It makes the hymn especially appropriate for singing on Aldersgate Sunday.

“How small a spark” was Shirley Erena Murray’s contribution to the Wesley 250th Anniversary in 1988. She comments that “Colin Gibson [who composed the original tune, “Aldersgate”] and I put some heart into this, since we were both born Methodists.”

The hymn alludes to a number of aspects of the life of John and Charles Wesley and to Methodist tradition in general:

Verse 1: “to dare and bring the faith out in the open air!” John Wesley, rather reluctantly at first, began preaching out of doors because his evangelical message and embrace of working class people was not welcome, by and large, in the Anglican parish churches of the time.

Verse 2: “the Good News travels on, it rides the road”. Both Wesley brothers, but John in particular, rode thousands of miles on horseback across the length and breadth of Britain, preaching and establishing new meetings of Methodists. (In 1973, the Revd Alan Thornhill and Australian pianist and composer Penelope Thwaite wrote a musical based on the life of John Wesley and called it Ride! Ride!)

Verse 3: “born in song”. A famous description of the Methodist movement, used in the preface to the 1933 Methodist Hymn Book and also taken up by the Revd Brian Hoare in Born in Song! (StF 21).

Verse 4: “our hearts be warmed again”. A reference to John Wesley’s description of his conversion:

“I felt my heart strangely warmed…I felt I did trust in Christ, Christ alone, for salvation; and an assurance was given me that he had taken away my sins, even mine, and saved me from the law of sin and death.” (See a fuller account on the Methodist Church website.)