I come with joy, a child of God 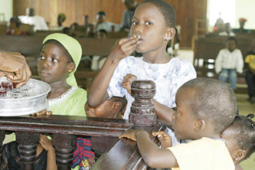 Consider singing verses 1-3 before the sharing of communion bread and wine, and verses 4-5 following, in preparation for the “going out” that the words anticipate.

You may wish to sing the first three verses as the bread and wine are brought forward to the communion table by a single individual, perhaps a child.

The first two verses also suggest the possibility of being sung by solo voices, and the third by the person leading the celebration of communion. The rest of the congregation might then join in for verse 4 and 5.

This hymn was written in 1968 for Brian’s congregation at Hockley in Essex (now Hockley and Hawkwell United Reformed Church) to conclude a sermon-series about communion. The words have what has been described as an “egg-timer” shape: dispersed Christians coming together for worship and spread out into the world again. As Brian notes, the verses also progress from the individual (“I come”) to the collective (“we’ll go”). Verse 4 describes Christ’s presence within the faith community as well as in the communion meal. 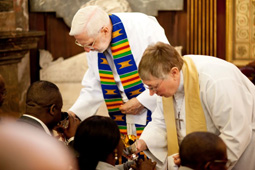 Brian revised the hymn in 1977, avoiding the non-inclusive language of the original (e.g.“Man’s true community of love” in v2) and it was this version that was used in Hymns & Psalms (H&P 610). In 1993, Brian revised the text again in a way that reflected his evolving desire to avoid God-language that is male and hierarchical.

He had laid out his thinking fully in his influential 1989 book, What Language Shall I Borrow?: God-talk in worship – a male response to feminist theology. This led to the revision of many of his earlier hymn texts (for instance, Christ is alive! Let Christians sing (StF 297)) and accounts for many of the differences between the versions of this hymn printed in Singing the Faith and Hymns & Psalms.

Apart from the first line itself (previously "I come with joy to meet my Lord") the most significant changes are those in the final two verses – especially verse 5, where the joy of gathering in worship (v.1) now comes round full circle and is expressed in the Christian sharing of God’s love. Poetically stronger, this revision also steps back from the previously sharp division between God’s people and “the world”, as if to say: “We all live in God’s world; we are all God’s children; and we are all in this together”.

Together met, together bound,
we’ll go our different ways,
and as his people in the world
we’ll live and speak his praise

Together met, together bound
by all that God has done,
we’ll go with joy, to give the world
the love that makes us one. 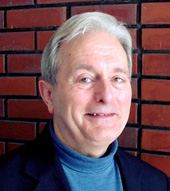 Following an education at Oxford University, Brian Wren was ordained as a Congregational minister in 1965, and held an appointment at Hockley, Essex. It was for the congregation there that he wrote some of his earliest (and still most familiar) hymns. Many of these were set to music by his friend Peter Cutts and published in his first collection, Faith Looking Forward (1983). In 1970 he became an education consultant and writer, working for Third World First and as a Chairperson of the Council of War on Want.

As his hymns became more widely known, Brian Wren was increasingly in demand in the United States as a leader of hymn and worship workshops. He moved to the States in 1991 and, from 2000 to 2007, was the John and Miriam Conant Professor of Worship at Columbia Theological Seminary in Decatur, Georgia.

Brian's 1996 collection, Piece Together Praise: a theological journey contains all his texts in their revised form to that date, but he continues to write. His most recent collection of hymns, In God Rejoice!, was published in 2012, while Hymns for Today offers an accessible overview of hymns written between 1983 and 2007.