Out of the depths I cry to thee

Compare Martin Luther’s paraphrase of Psalm 130 with other versions of the psalm, including the responsive reading versions at StF 832 and David Lee’s paraphrase, Out of the depths I cry to you.

The emphasis on God’s saving grace (as opposed to saving ‘works’) that Luther draws out of Psalm 130 (see esp. vv.2 &3) is also explored in Luther’s Preface to the Epistle to the Romans, which made a life-changing impact on John Wesley one evening in Aldersgate Street, London (see below). You may wish to consider reading an extract from Luther’s Preface alongside the singing of this hymn. 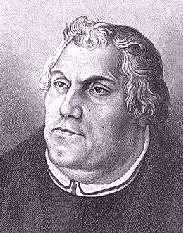 In The Methodist Hymn-Book Illustrated, John Telford (1924) wrote about this paraphrase of Psalm 130:

“[This] is a version of Psalm cxxx, which Luther called a Pauline Psalm, and greatly loved. He took special pains with his version. It was sung on May 9, 1525, at the funeral of Friedrich the Wise, in the Court Church at Wittenberg. The people of Halle sang it with tears in their eyes as the great Reformer’s coffin passed through their city on the way to the grave at Wittenberg. It is woven into the religious life of Germany.

In 1530, during the Diet of Augsburg, Luther’s heart was often sore troubled, but he would say, ‘Come, let us defy the devil and praise God by singing a hymn.’ Then he would begin, ‘Out of the depths I cry to Thee.’ It was sung at his funeral.”

In his “Pauline Psalm”, Luther emphasises the idea that our lives may be transformed not by working hard (and maybe reluctantly) to “do the right thing” in order to buy God’s pleasure but through the generous grace of God:

the strictest life is but vain,
our works can nothing win (v.2)

my works I count but dust:
I build not there, but on his word,
and in his goodness trust. (v.3)

It’s a theme that Luther takes up in his Preface to the Epistle to the Romans, which John Wesley speaks about in the account of his ‘conversion’ experience on 24 May, 1738:

“In the evening, I went very unwillingly to a society in Aldersgate Street, where one was reading Luther’s Preface to the Epistle to the Romans. About a quarter before nine, while he was describing the change which God works in the heart through faith in Christ, I felt my heart strangely warmed. I felt I did trust in Christ, Christ alone for my salvation; and an assurance as given me that he has taken away my sin, even mine, and saved me from the law of sin and death.”

The words of Luther to which Wesley alludes, and which expand on the words of this hymn, may have included these:

“Faith is a work of God in us, which changes us and brings us to birth anew from God (cf. John 1). It kills the old Adam, makes us completely different people in heart, mind, senses, and all our powers, and brings the Holy Spirit with it. What a living, creative, active powerful thing is faith! It is impossible that faith ever stop doing good. Faith doesn't ask whether good works are to be done, but, before it is asked, it has done them.

“Faith is a living, unshakeable confidence in God's grace; it is so certain, that someone would die a thousand times for it. This kind of trust in and knowledge of God's grace makes a person joyful, confident, and happy with regard to God and all creatures. This is what the Holy Spirit does by faith.”