As servants working an estate

Placed within the StF section headed “Growth in Grace and Holiness”, this hymn’s theme of God’s return and judgment means that it also works well during the season of Advent. Compare Thomas Troeger’s echoes of the prophet Amos, for example, with Jan Berry’s Praise to the God who clears the way (StF 183):

Praise to the God who comes to judge
the truth of word and deed,
who calls our minds and wills to change,
rebuking wealth and greed. (v.2)

Similarly, Charles Silvester Horne write that “souls shall be saved form the burden of sin” (Sing we the King who is coming to reign, StF 185).

All these hymns offer an excellent starting point for a sermon or discussion about how our lives may reflect Christ’s compassion in the “waiting time” that Advent marks.

In an interview with Yale Divinity School News shortly before he retired in 2015, Thomas Troeger commented that across his four-decade career, “two things haven’t changed – the persistence of sin and the power of grace.”

It’s an idea that is reflected in the words of this hymn. As with his other hymn in Singing the Faith (Swiftly pass the clouds of glory, StF 260), Thomas uses the first verse of his text to paraphrase a biblical story. The following verses then reflect on its meaning.

Thomas draws on Mark 13: 24-37 in which Jesus warns that no one knows the “day or hour” when God’s time of judgment will come to us. Jesus’ words at his ascension are also echoed: “It is not for you to know the times or periods that the Father has set by his own authority.” (Acts 1: 6-7). In the Gospel, Jesus describes our need to be prepared as like servants who have been put in charge of a man’s house and estate – they must get on with their work but remain alert for their master’s unheralded return.

What Thomas does in the other three verses is ask: What does the waiting time look like? How will we work and live?

His answer is that we mustn’t rely on our own “fragile human schemes” to resolve all the world’s injustices but show Christ’s compassion and trust in God’s grace. (v.2) 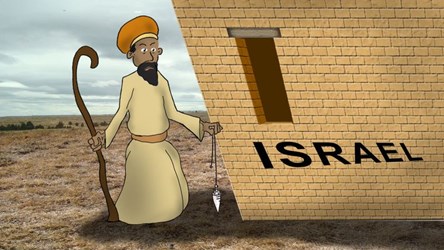 In verse 3, Thomas underpins that message by recalling words of the prophet Amos (7: 1-15). Within a sequence of visions of God’s judgment and northern Israel’s imminent demise, Amos recounts a vision of God using a plumbline (a weight hanging on a thread, see right) to test whether Israel’s walls are straight and secure. They are not, they are leaning insecurely, so must be demolished – like Israel itself. The plumbline is like God’s moral gauge of Israel’s behaviour (and ours), which overrides the accepted norms of our society, past or present.

“The sins that have led to this judgment are social injustice, such as depriving the poor of their rights, and religious arrogance.” (Gene Tucker, Harper’s Bible Dictionary). In a prosperous nation, religion has become shallow – God is not denied, but the people live as if God didn’t exist. Instead, we should remember the injunction of another prophet, Micah, to which Thomas alludes at the conclusion of the hymn: “And what does the Lord require of you? To act justly and to love mercy and to walk humbly with your God.” (Micah 6: 8) It is a way of living by which we depend on God rather than on our own abilities (Micah 2: 3) – the grace, as Thomas has it, that trumps sin. 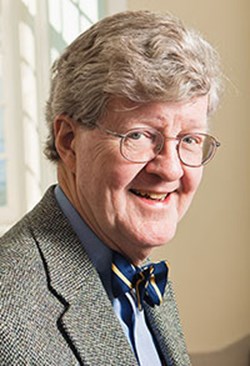 Many of Troeger’s hymns reflect directly on biblical passages. In an interview with Thomas Troeger in Yale Divinity School News (March 2013), he said: “Yes, my mother read the Bible to me every morning. ‘You need Jesus!’ she would say. She was a strong churchgoer, a probing woman.” (In the evening, he’d sit with his father and listen to Bach, Handel or Haydn. His first career ambition was to be a professional flautist.)

Described in the early 1990s as “probably America's finest living hymnwriter”, Troeger spent nearly 40 years as a teacher of homiletics and “a practitioner of the Christian imagination” (one of his books is titled Imagining a Sermon). He taught at Colgate Rochester Divinity School, Iliff School of Theology in Denver, and – for the final ten years of his career – at Yale Divinity School. He was ordained as a pastor-priest in both the Presbyterian and the American Episcopalian churches and was a past president of the Academy of Homiletics. Born in 1945, Thomas Troeger died on 3 April, 2022.

His output was substantial – books on preaching, on how to pray the Psalms, the relationship between yoga and the western prayer tradition, anthems, poems, and around 600 hymn texts. His hymn collections included Borrowed Light (1999), God, you made all things for singing (2009), and Song that Blesses Earth (2015) - all published by Oxford University Press. Hymns, he said, are “a way to do theology. . . If you ask people what they’re most likely to remember – a Bible passage, a sermon, or a hymn – which do you think it would be? Surely a hymn!”