Calm me, Lord, as you calmed the storm

It is important to note that the tune is marked “Tranquil”. The hymn speaks of “the tumult within me” but is underpinned by a sense of being enfolded, ultimately, in a divine peace.

Like the Taizé chants of Jaques Berthier, this text and tune is suited to repetition and reflection. It is, first and foremost, a prayer and can be used as such in worship. For example, it would lend itself to being sung at the close of prayers of intercession or petition – or once or twice as a sung response to such prayers.

Alternatively, by alternating the sung verses with instrument-only versions of the tune, it is possible to offer space for reflection and stillness.

The personal, almost private, quality of the words would be useful for a service of reflection during Lent. 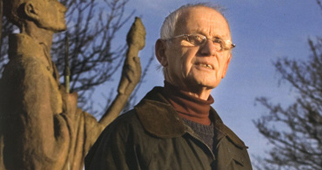 This is one of a number of hymns in Singing the Faith that draw upon the Gospel story of Jesus calming a violent storm on the Sea of Galilee (Luke 8: 22-25). Others include Jesus call us! O’er the tumult of our life’s’ wild restless sea, StF 250; Dear Lord and father of mankind, StF 495; My troubled soul, why so weighed down? StF 635; When we were in the darkest night, StF 241.

None of these other hymns, however, capture in quite the same way the sense of calm that Jesus brings to the terrified disciples. This has to do partly with the simple directness of David Adam’s words, which he calls a Prayer of St Patrick. Partly, also, it has to do with the setting by Margaret Rizza, marked “Tranquil”.

Margaret says that she was attracted to David’s words because the disciples’ fear echoes “the huge tumult within me – the things I get concerned about”. What both author and composer strive for in their work is to acknowledge but also to overcome that sense of the world’s tumult by centring themselves on trust in God’s constant presence in all times and places.

Margaret has said: “All of my music is underpinned by prayer – which consists of doubt, anxieties, desert stones… but also deep joy and gratitude and glimpses of something that I can’t quite put my hand on… something not of this world.”