The silent stars shine down on us 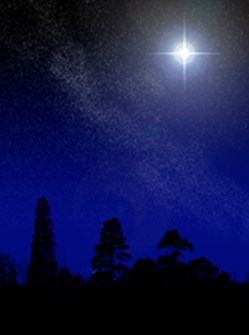 For a hymn that sits appropriately in the Epiphany section of Singing the Faith, “The silent stars” makes surprisingly little reference to the narrative of wise men travelling to visit Jesus in Bethlehem. However, the two lines that do are important:

We see the star the wise men saw
and hope again is stirred. (v.3)

For this is a hymn of hope born out of reconnection; a hymn that acknowledges the place of disconnection and doubt from which God’s love draws us. It moves from the silent stars that pay us no attention (v.1) to “Christ, the bright and morning Star / whose radiance does not fade”. (v.4) That final image of the star that stands bright in the sky just before dawn, heralding a new beginning, also underscores the oneness of Jesus of Palestine (whose footprints were left in time, v.3) and the Creator God “whose glory filled the universe / before the planets played”. (v.4) (The “morning star” image can be found in the book of the Revelation, 22: 16 and in 2 Peter 1: 19.)

In Verse 1, Herman Stuempfle describes the smallness of human experience within the vastness of the universe; he uses two images to evoke a sense of disconnection from a personal God. He writes of the silent stars “unmindful of our little earth”, and of grains of sand (“unvalued and unseen”) beside a cosmic sea. There is something here of Matthew Arnold’s poem Dover Beach in which Arnold speaks of doubts and uncertainties surrounding faith in turbulent times. The “sea of faith”, he writes, is withdrawing: 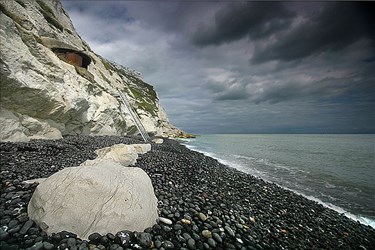 Retreating to the breath
Of the night-wind, down the vast edges drear
And naked shingles of the world.

In an introduction to Arnold's poem for the BBC 4 series, A Poet’s Guide to Britain, Owen Sheers described it as  "a poem that ends with the shocking conclusion that there is no hope, no comfort and no purpose in life."

From a similar starting point, Herman Stuempfle reaches quite a different conclusion. Just as the wise men in the Gospel of Matthew track across lands and deserts to make connection between Gentile peoples and the incarnate God, so God reaches across time and space, calling our hearts so that we might “know that we are known”.

Jesus’ journeys of connection are also recalled. Anyone who has watched Pasolini’s 1964 film, The Gospel According to St. Matthew, will have held that recurring image of Jesus striding across the rural places of Palestine to spread his message. Here, God, who shares our experience of time and earth-bound living, climbs eventually the hill of Golgotha so that divine love may be expressed at its most powerfully self-giving. This is love that not only formed the universe – which at times, feels so remote and unforgiving – but which listens out, also, for our cries, however faint. (v.3)

Stuempfle’s hymn concludes with an allusion to the star that guides the wise men on their journey. The final two lines are a prayer of hope, that God will “shine down upon our darkened earth and conquer sin’s long night.” We may interpret this sin as life disconnected from God; something like the blinding doubt that Matthew Arnold evokes.

World events and dominant cultural views are apt to smother the clarity of the divine Word “that broke the silences of space” (v.2); but in the incarnate God in a stable, and the brave, persistent journey of the wise men over a great distance, we may perceive God reaching out to us, and a hope-nurturing image of our human community re-connecting with God. 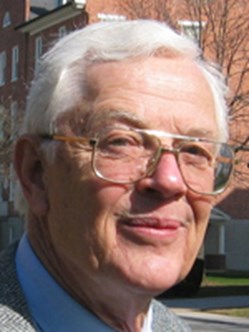 Stuempfle, a minister of the Evangelical Lutheran Church in America, lived in Gettysburg, Pennsylvania, for five decades, and was on the faculty of the Lutheran Theological Seminary (now the United Lutheran Seminary) for 27 of those years. He served as professor, dean, and president. In 1962 he had taken up the post of John and Susannah Ulrich Professor of the Art of Preaching, and in his honour the Herman G. Stuempfle Chair of the Proclamation of the Word has been established. As a professor of homiletics, his most well-known publication was Preaching Law and Gospel. One reviewer wrote of the book that “Herman Stuempfle challenges tidy and trivial approaches to preaching with a call for sermons that embody the deep and enduring theological themes of law and gospel.”