Guide me, O thou great Jehovah

This is a highly visual hymn about a number of dramatic episodes in the life of the people of Israel. Its recalling of the journey of the Israelites through the desert suggest the planning of a procession - perhaps with a banner or other representation of the "fiery, cloudy pillar" (v.2). The use of long stretches of blue material might stand for the river Jordan. A bit of pre-planning could make for a memorable all-age worship experience.

Especially if communion is being celebrated (but even if not), consider lifting a loaf of bread high at the communion table during verse 1 ("Bread of heaven, feed me now and evermore").

This hymn is a supreme example of "biblical typology", in which episodes from the Old Testament (Hebrew scriptures) are seen to prefigure the life and work of Jesus. The Book of the Exodus is particularly evident here, especially Exodus 16 (the story of the "bread from heaven") and Exodus 13 (in which the Israelites are guided through the desert by a pillar of cloud and fire) - and these are linked with the Gospel of John chapter 6, in which Jesus also talks about the bread of heaven. Verse 3 ("When I tread the verge of Jordan... land me safe on Canaan's side") refers to Joshua 3: 8-17.

The hymn becomes an allegory for the journey of a Christian throughout their life on earth, requiring God's guidance and ending at the gates of Heaven (the verge of Jordan) and end of time (death of death and hell's destruction). 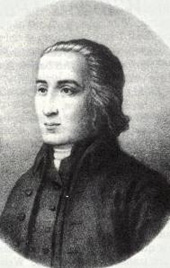 One of the most established and best loved of Methodist hymns, the words and music of Guide me, O thou great Jehovah, are an all-Welsh affair. The words were written by Welsh Methodist William Williams, who came to be known as "the sweet singer of Wales". The son of a prosperous farmer and an elder in the Independent congregation at Cefnarthen, William was converted by one of Geroge Whitefield's preachers, Howel Harris, while studying medicine at an academy run by an Independent minister at Llwynllwyd near Hay-on-Wye. Becasue of his Methodist views, Williams was refused ordination as a priest but he became a deacon of the Episcopal church in 1740, serving as a curate in chargeof Llanwrtyd and Llanddewi Abergwesyn. He was accused of various offences such as omitting the sign of the cross at baptsim and, in 1743, he resigned his curacies to join the Calvinistic Methodists.

Later known simply as "Pantycelyn" after the farm where lived, Williams was the most famous hymn writer of Welsh Methodism, producing a number of collections of his work. Hymns & Psalms (the 1983 Methodist hymn book) also included "Can I forget bright Eden's grace" and the triumphalist Palm Sunday hymn, "Ride on, Jesus, all-victorious".

The tune "Cwm Rhondda" (originally simply “Rhondda”) was composed for the annual Baptist singing festival at Pontypridd in 1905 and first appeared in an English hymn book in the Methodist Hymn Book (1933). But church musician Erik Routley noted, ironically, that:

“It bears exactly the same relation to the high tradition of Welsh tunes that “Crimond” [The Lord’s my shepherd, StF 480] bears to the Scottish psalm-tune tradition, and is now heard more often outside Wales than in its own country.”