Here as we kneel, here as we pray 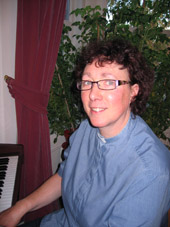 “Songs are a way of connecting with the things that people are experiencing,” says Clare Stainsby, a Methodist minister in Scarborough. She finds that that she most usually writes in response to something that is happening at the time. This hymn is one very good example.

“In this instance I was with a group that had come together one evening to pray for the 18-month old son of friends,” Clare says. “He was due to go into hospital for surgery the following day. There had been concerns during the day that the operation would have to be cancelled, so it was a time of anxious prayer.

“But, after a while, we stopped praying because we realised that we just needed to trust God; to know that his hand is upon each of us everyday; and to recognise that God’s grace is enough.”

Clare wrote the song that evening when she got home, finishing it with the words “Lord, we believe that your grace is sufficient for today”, and popping it through the letterbox of her friends’ house the following day. Their son made a good recovery, says Clare, and is now a keen 19-year old climber!

Clare has four other hymns in Singing the Faith, including two for Advent and Christmas: “Light a candle in a darkened place” and “Beneath the paper wrappings”. She says that, nowadays, she hasn’t time to write many songs; her time is spent writing sermons instead!

“But that’s no bad thing,” she adds, “as sermons are a different way of connecting with the things that people are experiencing.”