In labour all creation groans (StF 704)
Longing for light, we wait in darkness (StF 706) 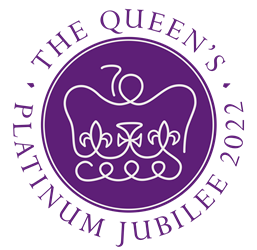 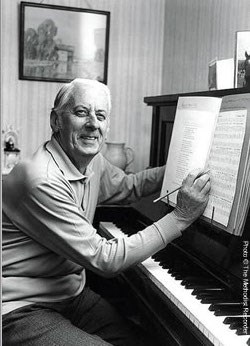 The Revd Fred Pratt Green (right) was commissioned to write this hymn by the Dean and Chapter of Norwich Cathedral to mark the Silver Jubilee of Queen Elizabeth II in 1977. Pratt Green headed his text: “A hymn for the nation”.

However, despite its genesis, and the grand tune by Walford Davies to which it is set, Pratt Green’s theme and imagery mean the hymn can be used far more widely than just for the occasional national celebration.

There are suggestions of confession that add nuance and realism to the praise (compare v.2 with the book of Proverbs 14: 34: “Righteousness raises a people to greatness; to pursue wrong degrades a nation”). It is striking, also, that, in Singing the Faith, the hymn is to be found in the Justice and Peace section of the book.

Leslie Griffiths (a past president of the Methodist Conference) has said of Pratt Green that “whether he wrote for the Queen’s jubilee or an international conference, for a church in Purley or East Finchley, he kept on worrying away at his two great themes: God’s providence and the Church’s task to continue Christ’s ministry in this and every age”.

The distinguished United Methodist church musician Michael Hawn points out that, far from being a two-dimensional text reflecting patriotism for one nation, ‘It is God…’ emphatically emphasises the living God’s sovereignty over all nations. Indeed, more than just ‘the nations’. . . The final verse carries a striking assertion that resonates with 21st century concerns about the care of planet Earth: “God reminds us every sunrise that the world is ours on lease”.

In other words, Pratt Green crafted a hymn of lasting value that may be used in a range of contexts – from jubilee celebrations to national moments of crisis or concern; as a hymn of recommitment or a text for Creationtide. There is a distinctly “psalmic” feel to the verses – and if you should ever need a hymn to reflect the Old Testament tale of Esther and Mordecai, this could be it! (See below.)

The words of this hymn are underpinned by a number of strong biblical allusions, starting with the very first line: “It is God who holds the nations in the hollow of his hand,” which, as Michael Hawn notes, clearly reflects Isaiah 40:12 – “Who has measured the waters in the hollow of his hand and marked off the heavens with a span?” The following line may remind us of Isaiah’s vision of a people who walked in darkness seeing a great light; “those who lived in a land of deep darkness—on them light has shined” (Isaiah 9:2). And then we shift into the New Testament with a reminder both of Jesus’ preaching illustration of a wise man who builds his house on rock (Matthew 7: 24-27) and, even more particularly, Hebrews 11:10 – “For he looked forward to the city that has foundations, whose architect and builder is God.” 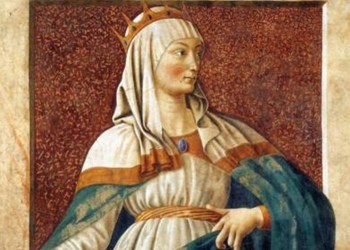 Pratt Green was thinking most obviously of Queen Elizabeth II in verse 3 – though even here, his theme is broader: the self-giving of God in Christ as the guiding example for Christian discipleship.

But perhaps there are suggestions in verse 2 of another queen who also served her people with self-giving. In the book of Esther, the eponymous Jewish Queen (pictured), who has been married into the Persian court, is persuaded by her older cousin Mordecai to speak up on behalf of her own people, who have been threatened with annihilation. “Perhaps”, he says to Esther, “you have come to royal dignity for just such a time as this.” (Esther 4:14) (Read more about the book of Esther.)

However, for all these individual biblical allusions (and others have been identified), it is the twin paths of discipleship and our interdependence under God as peoples of the world that drive this hymn forward. With a phrase to make us pause and reflect, Pratt Green writes of the “discipline of freedom” (v.2) by which we will know God’s saving power. To make God’s divine dream a reality requires each of us, from whichever strata of society we are born into, to hold consistently to the way of outward looking love and action.

At the same time, in this hymn we begin as nations held in the hollow of God’s hand and end as races living to together, understanding that the world is ours on lease. As Michael Hawn suggests, where earlier hymn references to a never setting sun might have evoked for British church goers the global stretch of British imperialism (e.g. From all the dwell below the skies, StF 75; The day thou gavest, Lord, is ended, StF 147), here Pratt Green turns that idea entirely on its head. As in Eden so in our contemporary world, we are urged to live together, share the world’s riches, and be at peace. (v.4) For this divine guiding vision, “may the living God be praised!”

Following its commission by Norwich Cathedral, this hymn was included in the official order of service for other church celebrations of the jubilee throughout the UK and the Commonwealth.

In part this was facilitated by a suggestion that had been made by Harry Eskew, editor of the Hymn Society of America (as it was then), that a slight amendment to the opening of v.3 would make the text suitable over the longer term and in other countries. Originally beginning: “When a thankful nation, looking back, unites to celebrate / Those who reign in our affection by their service to the state”, Pratt Green tweaked the lines to read: “has cause to celebrate / those who win our admiration by their service to the state”. (Thus were republicans of all nationalities also pacified!)

The popularity of Pratt Green’s hymn – and perhaps a reason for its commission in the first place – was in marked contrast to the reception given to the hymn written by the poet laureate at the time, Sir John Betjeman. His contribution, “In days of disillusion”, was widely ridiculed, causing many to look elsewhere for an appropriate hymn to mark the jubilee. 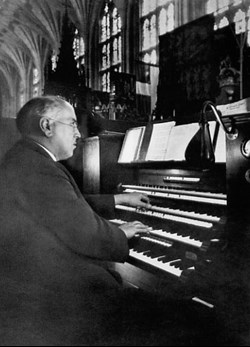 The stirring tune, “Vision”, may unwittingly suggest a mood of imperial triumphalism but could equally be seen as sitting in the line of marches for royal occasions by the likes of Elgar and Walton. Its composer, Sir Henry Walford Davies, a distinguished church musician and music professor (pictured left in St George's Chapel, Windsor), had also composed the Royal Air Force March Past and became Master of the King’s Musick in 1934. The Methodist Companion to Hymns & Psalms comments that the association with Walford Davies in this hymn is “particularly appropriate” as he had been the Queen’s music teacher in her childhood – though in fact the tune was written originally as a setting for “Mine eyes have seen the glory of the coming of the Lord”, penned by Julia Ward Howe during the early months of the American Civil War. The arrangement in Singing by faith is by John Wilson, Walford Davies’s nephew.