Longing for light, we wait in darkness

Equally successful accompanied by organ, keyboard or praise band, ‘Longing for light’ also lends itself to being shared between a soloist(s) and congregation. The burst of energy that the melody brings at the start of each refrain is emphasised still further when a congregation joins in at this point, responding to the prayer of a soloist in the preceding verse.

Alternatively, try having members of your congregation face each other in two groups (for example, across a central aisle), the two groups singing alternate verses (1 to 4) and joining together in the refrain. Everybody can join together in the final verse: ‘Many the gifts, many the people...’ In this way members of the congregation can commit themselves, through singing, to each other and to action for justice inspired by Christ.

Alison Richard’s has developed a simple liturgy around the singing of this hymn, designed to accompany the annual lighting of the Advent candles.

‘Longing for light’ is one of a number of hymns by Bernadette Farrell included in Singing the Faith that express a hope (underlying or overt) for peace and justice in God’s world. (See, for example, StF 26 and StF 577).

Each verse of this hymn follows a similar pattern, moving from a statement of what many long for yet don’t have – basic human rights and the fundamentals everyday living – to our commitment to share what we do have and respond to the needs of others. In this way, we may be a ‘light for the world to see, servants endeavouring to make Christ’s kingdom visible on earth. 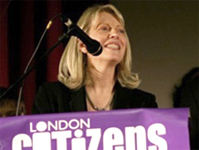 Bernadette Farrell is a British Catholic hymn writer born in West Yorkshire in 1957. Since the 1970s, she has become well-known across all Christian denominations for her challenging texts and memorable melodies. She says, however, that “writing wasn't my intention or plan. It was a practical response to the needs around me” – as this hymn demonstrates.

Bernadette’s personal commitment to social action is seen in her work as a community organiser for South London Citizens, part of Citizens UK – an organisation that seeks to empower groups and individuals to work together to change their communities for the best. She organised the successful ‘Lunar House Campaign,’ achieving improved conditions for staff and the public at the UK’s main immigration reception centre, a ‘Friends’ volunteer service and, eventually, a new £800,000 building in Croydon.

You can hear short audio clips of this and many other of Bernadette’s hymns and songs on the website of her American publisher.