Lord, you have come to the seashore

This is a song suitable for moments of commitment, dedication or covenant renewal. The lilting tune (built on triplets in 6/8 time) has a South American feel. It suggests a gently-paced performance with guitar accompaniment – though one Spanish version available on the internet presents a fiercely rhythmic and strummed guitar accompaniment that seems to reflect a passionate sense of practical Christian mission with almost revolutionary fervour. More usually, congregations will respond to the prayer-like nature of the words and melody, so that this is a hymn that can offer a few moments of still reflection within worship.

English-speaking congregations may have the resources to learn the first verse and refrain in the original Spanish:

Fr. Cesáreo Gabaráin (1936-1991) is one of the best-known recent composers of Spanish liturgical music. Many of his hymns and songs are inspired by the feelings and actions of ordinary people he met during his ministry. He is represented in Singing the Faith by “Pescador de hombres” (“Fisher of men”), known to be a favourite hymn of Pope John Paul II. As we sing it, we stand alongside those who have little – and admit that we, too, whatever our social position, have little to offer to Jesus of Galilee who gave his life for us. “Lord, see my goods and possessions; in my boat you find no power, no wealth. Will you accept, then, my nets and labour?” (V.2) (The same theme is explored by Christina Georgina Rossetti in her carol, In the bleak midwinter: “What can I give him, poor as I am?”)

The words of Verse 4 (“Lord, as I drift on the waters, be the resting-place o my restless heart”) echo the words of St Augustine in his Confessions: "You have made us for yourself, O Lord, and our heart is restless until it rests in you."

Cesáreo Gabaráin was born in 1936 in Hernani, in the northern Basque area of Spain. He trained as a priest in San Sebastián and served as chaplain and as a biblical theologian until his early death in 1991, aged 55. Following the Second Vatican Council, Gabaráin took full advantage of the new freedom now permitted in hymn-writing styles. With some 500 hymns and songs to his name, Gabaráin frequently evoked human need and one writer suggests that his hymns reflect “the deepest emotions of the human spirit”.

In an interview* given in Dallas, Texas, the year before he died, Gabaráin said that it was his desire to evangelise through song that motivated his work and spurred him into hymn composition in the first place.

“I went to seminary when I was very young – when I was eleven. The seminary was very musical and there I learned music very well. Later, when I was a priest, I was particularly involved with the children of several large schools. Then – out of necessity – I began to compose. I went to meet the children and they began bringing their guitars. I saw that with the old songs and Gregorian chants I would not be able to teach them much. So then I began to compose out of a pastor’s necessity, intending to share the things and ideas that I was trying to convey to the children.”

Of his considerable output, he said: “Many people ask me which hymns I prefer – which I like best. But for a father it is difficult to say which child he prefers most. 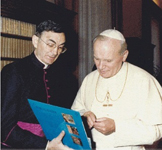 “The one that is sung most around the world is “Juntos como hermanos” (“Together like brothers”), because this is what we sing when we don’t know what to sing! But at the same time, a song that has made more of an impression, and also that I like better, is “Pescador de hombres” (“Fisher of men”). It has influenced popes, including John Paul II, who continues to like the song. And it is also a song of mine that is one of the most accepted throughout the world.

“But when you ask me what makes me most satisfied with a song, it is not that the popes like it. What interests me most, and is more important, is that a missionary deep in the jungle can tell me that a song has helped him to evangelise.”

An alternative translation, attributed to the same translator as the version in Singing the Faith, was published in Common Ground (Saint Andrew Press 1998). Arguably, its opening lines avoid the possible evocation of a British seaside.

Lord, you have come to the lakeside
looking neither for wealthy nor wise ones.
You only asked me to follow humbly.