O for a heart to praise my God

Correction to words: The final verse should be numbered verse "5", not 6 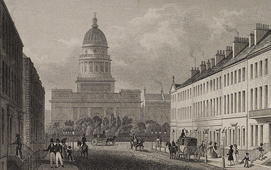 St George's Church, Edinburgh - as it was...

The tune "Abridge (St Stephen)" is not to be confused with the tune "St Stephen (Newington)"! Both tunes have attracted different naming traditions north and south of the Scottish border.

According to the Companion to Hymns & Psalms (1988), the present tune apears with the name "Abridge" in Isaac Smith's 'A Collection of Psalm Tunes in Three Parts' c.1780. However, in A.M. Thomson's 'Sacred Harmony, for the use of St George's, Edinburgh' (1820), the same melody, slightly modified, was known as "St Stephen's".

"The two names have remained customary in England and Scotland respectively, although for neither of them is there any apparent reason. Abridge is the name of a village in Essex." 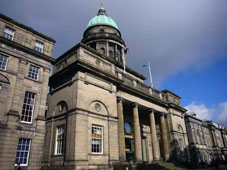 ... and as it now: West Register House in Charlotte Square

Likewise, the tune traditionally known in England as "St Stephen" (used in Hymns & Psalms for John Milton's "The Lord will come, and not be slow" and the Scottish paraphrase "Behold the amazing gift of love") is known in Scotland as "Newington" - a suburb of Edinburgh. "Newington" seems to have first taken that name in a collection published, once again, for use at St George's, Edinburgh - nowadays West Register House in Charolotte Square, one of three buildings housing the National Records of Scotland.