This hymn has its roots in a memorable story from the Hebrew scriptures, re-told in 1 Kings 19. Consider singing this hymn in the context of that story - re-telling it and sharing images such as the one below that help us experience the setting for the prophet Elijah's encounter with God.

It may be worth discussing what we mean by the phrase "inward ear" before singing the hymn - and how listening with an "inward ear" affects our thinking, praying and acting as Christians. 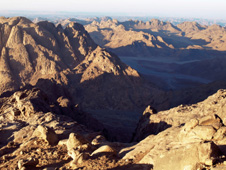 Mount Horeb and Mount Sinai (where Moses received the ten commandments) are sometimes considered to be the same place © 2014 Thinkstock UK, a division of Getty Images

Charles Wesley has based this text on a story of Elijah, who hears God speaking to him as he hides from his enemies on Mount Horeb (1 Kings 19). In the story, Elijah is on the run from King Ahab and his Queen, Jezebel. He has experienced God’s protection in the desert (vv.3-8) and finds his way to a cave. Here God tells Elijah to prepare himself for God’s self-revelation: it comes not in the form of a powerful wind or in an earthquake or through fire. Instead, Elijah experiences God as “a gentle whisper” (the “still, small voice of calm” that draws to a close StF 495, Dear Lord and Father of mankind). “When Elijah heard it, he pulled his cloak over his face and went out and stood at the mouth of the cave.” There he converses with God, who encourages him to take up the fight again against God’s enemies.

Wesley takes this account and transforms it into an allegory of the way in which we may experience God communicating with us and then respond accordingly. God’s grace is a “whisper”, which is heard in contrast to the noisy “world of sin” from which we wish to withdraw (vv.1 & 2). God’s love is a secret revealed (v.2) to our “inward ear”, and which in turn reveals “the depth of inbred sin” – all the unbelief, all the pride, that we need to allow to die, just as Jesus first died on the cross (vv. 3 & 4).

As well as Dear Lord and Father of mankind (StF 495), Christopher Idle also draws on the story in his hymn Lord, you sometimes speak in wonders (StF 158):

Lord, you sometimes speak in whispers,
still and small and scarcely heard;
only those who want to listen
catch the all-important word (v.2)