We turn to God when we are sorely pressed

"We turn to God..." is a hymn that may be of real value when responding to difficult situations, including bereavement. This and other hymns are referred to in the article Hope in dark times, compiled in reponse to World AIDS day, which occurs annually at the start of Advent. Take a look, also, at John Crum's deceptively simple Now the green blade rises, which explores the idea of hope pushing through beyond despair and death.

Consider using this hymn as a starting point for getting to know more of Bonhoeffer's writings. You can find useful links in our article Hymns from prison. 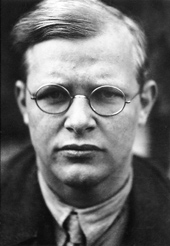 Stretched out upon my prison bed,
I stare at the empty wall.
Outside, a summer evening,
regardless of me,
goes singing into the country.
Softy ebbs the tide of the day
on the eternal shore…
In the stillness of the night,
I listen.
Only footsteps and shouts of the guards,
A loving couple in the distance, stifled laughter.
Can you hear nothing else, you sluggish sleeper?
I hear my own soul totter and tremble…

These words, from Dietrich Bonhoeffer’s poem “Voices in the night” (see Prison Poems of Dietrich Bonhoeffer), establish the prison context in which he also wrote the poem “Christians and Unbelievers” – of which this hymn is a reasonably faithful translation. 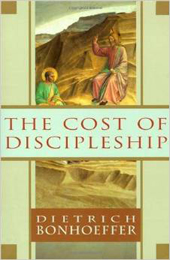 Bonhoeffer was a German Lutheran pastor, theologian, dissident anti-Nazi, and founding member of the Confessing Church. His writings on Christianity's role in the secular world, in which he called for a "religionless Christianity", have become widely influential and are described in his book The Cost of Discipleship. He strongly opposed Hitler's euthanasia programme and persecution of the Jews. He was also closely associated with members of the Abwehr who attempted to assassinate Adolf Hitler. This made Bonhoeffer more than an irritant theologian and he was executed in April 1945, aged 39, while imprisoned at a Nazi concentration camp, just days before German forces began to surrender.

In "We turn to God…", Bonheoffer’s theological reflections and his personal experience coalesce. There is strong sense, especially so in the original (see below), that there are times when Christians and non-Christians alike share extreme pain and suffering, and so turn to God. When they do, they discover a God who, in the person of Jesus, also experiences not just our sorrow but the very particular circumstances of our lives, good and bad. Not for Bonhoeffer a God who is “Lord” or “King” – overseeing the world from a remote and safe distance. Rather, he offers images echoed by later writers in the term “the crucified God”, in which we recognise a God suffering every bit as we do:

And find him poor, scorned, without roof and bread,
bowed under the weight of weakness, sin, and death:
faith stands by God in his dark hour of grief. (v.2)

This particular translation of Bonhoeffer’s poem echoes St Paul’s second letter to the Corinthians: “We are hard pressed on every side, but not crushed; perplexed, but not in despair...” (NIV translation) (2 Corinthians 4: 8-10). It also does two things to the original.

First, it softens (though the translators might argue “broadens”) the distinction between Christians and the “unbelieving”. Bonhoeffer originally ended that final line of verse 2 more unequivocally: “Christians stand by God in his hour of grieving”. One can imagine the unspoken "real" at the beginning of the line, alluding by contrast to Christians less willing to stand up to the Nazi regime, with its controlling Ministry of Church Affairs.

Secondly, this version takes on a stronger underlines more strongly an element of personal confession: “we seek release from illness, guilt, and death; God is “bowed under weight of [our] weakness, sin, and death”. This is also where the hymn ends, with God’s forgiveness of all sins.

But however sorely pressed we are, Bonhoeffer leads us back to the God who cares for us in all our circumstances (v.3), as symbolised in the bread of communion (for example, in 1 Corinthians 11:23-6).

This closer translation of Bonhoeffer’s poem is taken from his Letters and Papers from Prison.

Men go to God when they are sore bestead,
Pray to him for succour, for his peace, for bread,
For mercy for them sick, sinning, or dead;
All men do so, Christian and unbelieving.

Men go to God when he sore bestead,
Find him poor and scorned, without shelter or bread,
Whelmed under weight of the wicked, the weak, the dead;
Christians stand by God in his hour of grieving.

God goes to every man when sore bestead,
Feeds body and spirit with his bread;
For Christians, heathens alike he hangeth dead,
And both alike forgiving.

In the Methodist Recorder (17 April, 2015), Dee Major also writes persuasively of another Bonhoeffer hymn, “By gracious powers so wonderfully sheltered”, variously translated into English by such respected hymn writers as Keith Clements, Fred Pratt Green and Alan Gaunt. Dee describes this text as “a profound reflection on suffering and Christian faith, which closes on a note of quiet trustfulness”.

As she suggests, it easy to see Bonhoeffer’s own experience reflected in such lines as:

Yet is this heart by its old foe tormented,
Still evil days bring burdens hard to bear;
O give our frightened souls the sure salvation
For which, O Lord, You taught us to prepare.

– and in Bonheoffer’s identification with the cup of suffering, “hard to understand”, of which Jesus speaks in the garden of Gethsemane:

We take it thankfully and without trembling,
Out of so good and so beloved a hand.

As in “We we turn to God…”, such tough experiences are again encompassed around by a divine presence – the “gracious powers” of the opening line. God “never fails to greet us each new day” (v.1) and, “come what may”, we can be confident that “our whole life will be [God’s] alone” (v.4).

Dee’s concluding words are applicable to both these hymns: “[“By gracious powers…] encourages us to see God’s hand at work in everything that happens, the bad as well as the good. He doesn’t believe that God deliberately afflicts us for no good reason; he just invites us to continue to trust in the knowledge that God is love.”