When circumstances make my life

Martin Leckebusch describes this hymn as “devotional”, and it is well suited to reading quietly during a period of private prayer. Try saying these words out loud after reading Psalm 23, with which it has similarities.

In the context of worship, this is a hymn that lends itself to singing quietly (maybe remaining seated), with a period of quiet reflection either side. Perhaps use it as a conclusion to Prayers of Intercession (or “Prayers of the People”), which may have allowed the option of participants taking time to write down their pressing concerns on pieces of paper and gathering these together as an offering for prayer.

There is a directness and simplicity about the first four lines of this hymn that reflects Martin Leckebusch’s aim of avoiding religious language that is “alien to outsiders or new Christians”. Read as a single sentence, this is the language of everyday conversation; and it acknowledges the everyday reality of living – whether as a Christian or not. The circumstances of our lives are indeed often difficult to deal with or comprehend. Martin describes the hymn simply as “devotional”, but notes that it was written just a year after the death of his own young child. 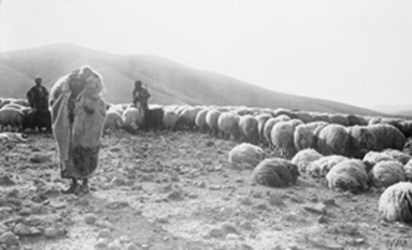 The following verses strongly echo Psalm 23 (“The Lord is my Shepherd…”), though the hymn is not a direct paraphrase. Rather, it is personal expression of feeling secure within God’s love – a knowledge derived from the life and example of Jesus (“Gethsemane and Calvary affirm God’s love is real”, v.3).

Though “sorrow and perplexity are often what I feel” (v.3), Martin finds that any pull towards doubt in his faith is alleviated by persistent hope. When creating thematic indexes for his hymn collections, “what has surprised me is how many time times I list the theme ‘hope’ against a hymn.” In his everyday life as a family man and an IT Designer, he says that he’s in danger of becoming a bit cynical, ground down by the day-to-day. Yet in his hymns he expresses the underlying hope that the theologian Alan Lewis says is everything that mere optimism isn’t:

“For hope, finding space to flourish in the very absence of optimism, is the courage not to be swallowed by despair but, in frank acknowledgement of rampant evil and negation, to trust in the possibility for life and creativity amid and beyond that malign [super-power], though assuredly not in its denial or avoidance.” (Read more of Alan’s reflections in Avoiding Easter Saturday.)

Martin published this text (More than Words, 2000) with inclusive language alternatives to three of the lines. Singing the Faith has adopted one (“God’s promise and God’s care” replaces “his promise and his care” (v.4, line 2)) but retained the original version of verse 2, lines 3-4 (“I know the Shepherd…”). Martin’s alternative lines read:

I know the Shepherd leads the sheep
with grace which keeps us strong.

The simplicity and quiet reflection of this hymn’s words are perfectly matched by this late 18th century tune, attributed to Hugh Wilson. The cadence of Scottish traditional music in its closing bars reflects its origins in a tune (named “Fenwick”) published for the use of teachers in music classes in Fenwick, near Kilmarnock in the west of Scotland. It has some slight resemblance to a traditional air titled “Helen of Kirkconnel” (http://www.8notes.com/scores/4849.asp):

Read what John Bell has to say about hymns and traditional folk melodies.)

Hugh Wilson (who was born in Fenwick in around 1766) was a shoemaker who also studied music and mathematics and became proficient enough in various subjects to become a part-time teacher to the villagers. Around 1800 he moved to Pollokshaws near Glasgow to work in the cotton mills, and later moved to Duntocher, where he became a draftsman in the local mill. Composing hymn tunes was a hobby (as was making sundials). Wilson was a member of the Secession Church, which had separated from the Church of Scotland. He served as a manager and precentor in the church in Duntocher and helped found its first Sunday school.

Also available in a standard common metre version (as opposed to the triple time version used in Singing the Faith), “Martyrdom” has become associated with the William Cowper hymn, “O for a closer walk with God”, while in the Scottish Psalter (1929) it was recommended for use with Psalm 23 (see above) as well as Psalms 57 and 130.

It has been suggested that R.A. Smith, who published the melody in a hymn book for use in St George’s Church, Edinburgh, in 1825, may have misunderstood the name “Fenwick” and thought it referred to the martyred covenanter, James Fenwick; hence the name “Martyrdom”.