Where shall my wondering soul begin?

When worshipping with children and younger people, telling a story behind the hymn can help bring it to life for them.

"Where shall my wondering soul begin?" is a big hymn with older language but it includes the line “a brand plucked from eternal fire”. It’s a biblical phrase (Zechariah 3:2) that John Wesley used to refer to himself, recalling his rescue as a small child from the burning manse in Epworth. 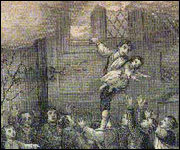 The young John Wesley - "a brand plucked from the burning"

The Old Rectory in Epworth was the Wesley family home until 1735. It was rebuilt after fire destroyed the original building 1709. It is suspected that this fire was an act of arson perpetrated by opponents of John's father, Samuel Wesley, the Rector of Epworth.

The fire could have killed the five year-old John, but he escaped from a first floor window. He was afterwards referred to by his mother, Susanna, as "a brand plucked from the burning". Perhaps when John recalled this event he sensed that he wanted to make the most of the life for which he had been saved, and to give something back to God.

The hymn is of course appropriate for singing when recalling the beginnings of Methodism and the lives of John and Charles Wesley. Charles’s “conversion hymn” also celebrates at any time a core belief of Methodists: that God’s grace is available to all and is gifted to us even before we seek it out. It is a fine congregational hymn that helps to harness a sense of shared thankfulness. At the same time, as its genesis suggests (see below), this is a highly personal text and would merit being listened to, sung or spoken, by a single voice – perhaps following an account of Charles’s conversion. 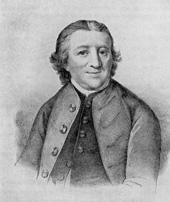 Peter Böhler, a German-born Moravian who was a spiritual mentor to Charles Wesley

Charles Wesley began writing this hymn two days after his “conversion” experience on 21 May 1738. His experience came at the end of an intense period of trying to discover within himself reassurance of God’s love. To Peter Böhler, a German-born Moravian, he had expressed the hope that he would be saved “because I have used my best endeavours to serve God”, and was taken aback and frustrated when Böhler simply shook his head in implicit criticism of such an approach. That was in the February. In the months following, and in ill health, Charles met and stayed with John Bray, “a poor ignorant mechanic, who knows nothing by Christ, yet, by knowing him, knows and discerns all things”, and also found inspiration in Martin Luther’s ‘Commentary on Galatians’.

Charles had confessed to Peter Böhler his “unbelief and want of forgiveness”. On 21 May, he was settling down to sleep when John Bray’s sister, Mrs Turner, came to the door of his room to offer him this message: “In the name of Jesus of Nazareth, arise and believe, and thou shalt be healed of all thy infirmities”. Accepting these as words offered by Christ himself, Charles found himself more relaxed, sensing God’s unconditional love more fully. “I now found myself at peace with God,” he wrote, “and rejoiced in hope of loving Christ. My temper for the rest of the day was mistrust of my own great, but before unknown, weakness (I humbly hope to be more and more so), yet confident of Christ’s protection.” 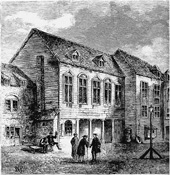 The Marshalsea prison for debtors in the 18th century

In “Where shall my wondering soul begin?” (which is said to be the hymn that Charles sang with his brother John following John’s own experience of conversion at a meeting in Aldersgate Street three days later, on 24 May), Charles Wesley celebrates his experience of God’s forgiving love as an “antepast [foretaste] of heaven” (v.2). He proclaims Jesus as someone who opens his arms to all “outcasts”, inviting all to believe. (The use of the word, which metaphorically describes his own spiritual state, may also draw on his experience visiting the poor and those in prison while still a student in Oxford – a practice he took up again in earnest following his conversion, in particular in Newgate Prison and in the Marshalsea. The hymn was first published in an eight-verse version in Hymns and Sacred Poems (1739) with the heading, ‘Christ the friend of sinners’.)

Whatever the situation we find ourselves in, Charles had discovered, it is only the grace of Christ that men and women need to accept in order to find themselves at home with God (v.5). Such a gift is not at all dependent on our own good deeds – the “best endeavours” that Charles had described to Peter Böhler just a few months earlier.