A man, despised and laughed to scorn (website only) 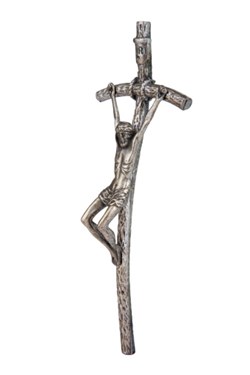 A man, despised and laughed to scorn,
insulted, whipped, brought low,
denied and, on the cross, bereft -
what was the crime, the fault, the threat,
that he should suffer so?

A trouble-maker?  No – the one,
through worldly fail and fall
and fears of God-forsakenness,
revealing power in powerlessness -
God’s foolish gift to all.

Misunderstood by those who seek
security and fame,
God hangs, arms open to the world,
embracing life - not yet unfurled
by those who claim his name.

One member of the StF submissions group found that Andrew Brown’s hymn “sums up very well a pivotal moment in time”. That time, of course, is the day of Jesus’ crucifixion. And to a certain extent, this text is about the onlooker just as it is about Jesus himself. (Cf. Isaac Watts’ When I survey the wondrous cross, StF 287.) Andrew steps back from the “pivotal moment” and poses some of the hard questions that observers, now as then, have to ask. Such questioning is not confined to Good Friday, so this hymn – like Watts’ – becomes a hymn for all seasons, not just one.

This is a text worth reading out loud, too. The very brokenness and unevenness of the lines make their own impact (see below).

There is an unflinching immediacy about “A man, despised”. It doesn’t view the crucifixion from a safe distance – on a green hill far away (StF 284), but from the foot of the cross, where blood drips onto the rocky soil. Alan Gaunt does something similar, but he moves quickly to the broader theological point – that what we are looking at is divine love at work:

Brian Wren (Here hangs a man discarded, StF 273) also turns quickly to metaphor. He draws on St Paul’s declaration that Christ’s crucifixion was “a stumbling-block to Jews and foolishness to Gentiles” (1 Corinthians 1:22-24). Wren is reminded of “a scarecrow hoisted high” –

a nonsense pointing nowhere
to all who hurry by.

The words from 1 Corinthians underpin Andrew’s hymn, too – most obviously at the close of v.3. However, he lingers more intently than others on the physical torment that Jesus underwent: the arms pinned wide, the shuddering breaths, the pain-racked frame (v.2). 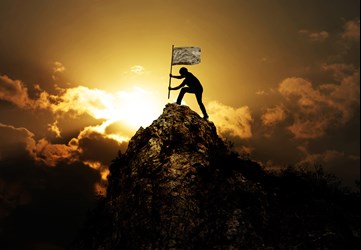 We are forcibly reminded that, under Roman law, this was the shameful death of a criminal and trouble-maker – an assumption that Andrew refutes emphatically: “A trouble-maker?  No. . .” He describes Jesus’ “worldly fail and fall”, and the fear that he has been forsaken by God (v.3), as a misunderstanding by those “who seek security and fame”. This is God on the cross, with arms open to the world. It will be up to the onlookers (then and now) to share that divine embrace of life with the world, like the dramatic unfurling (as Andrew imagines it) of a flag.

Andrew says that "A man, despised" was the first hymn that he wrote. “It sprang from a service where a minister friend of mine had clearly struggled to find hymns that reflected the message she wanted to convey about the crucifixion.” In it, he avoids easy patterns and smooth sentence structures. Instead, the unevenness of his phrases creates an unsettling stop-and-start feeling, which has the effect of jerking us out of our complacency and asking the very question St Paul raises again and again in his letters to the early Christian communities: How will we share and live out this defining Gospel event?

Andrew Brown has been a Methodist Local Preacher for over forty years and is now based in Yorkshire. He says: “I became interested in writing hymn poems in 2003 and am keen to provide words that question and challenge, while remaining true to the good news of God’s love for each individual.”