O Watcher in the wilderness (StF 667)

O Watcher in the wilderness,
O Lord of bush and flame,
you meet us when we least expect
and summon us by name.
From our routine we turn aside
to see your wonders here;
you bid us stand on holy ground,
and overcome our fear.

O Friend and Master, Jesus Christ,
in whose great name we meet,
you take the basin and the towel
and kneel to wash our feet.
You call upon us by this sign,
as we’ve been served, to serve;
then send us out to do God’s work,
to give without reserve.

O Guide and comfort, Holy God,
among your people now,
you speak to us, and urge us grow,
and gifts and grace endow.
Unblock our ears, unlock our hearts,
truly to hear your word;
and strengthen, Lord, each onward step,
to live as we have heard. 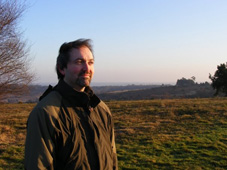 You have to wonder what mood Moses was in the day he came across an undiminishing burning bush in a desert place. (Exodus 3: 1-12) Not what side of bed he got out of, but what kind of place he was in his deepest self. For Moses, surely, had found himself in a desert place long before he led his father-in-law’s sheep toward Horeb, ‘the mountain of God’.

An exile in Midian, he had named his firstborn son tellingly: Gershom (suggesting something like ‘sojourner there’), “because I have become an alien in a foreign land”. He is safe, not enslaved or fearful like his Hebrew brothers and sisters in Egypt; but he appears dislocated and without purpose. Despite having a wife and family now in his life, there is about Moses a veil of inadequacy, of failure to do anything really useful with his life. It’s a feeling too often accompanied by a lesser or greater degree of depression.

And that, as Dominic Grant’s hymns hints, is as true of an active, busy life as of one that appears more obviously cast adrift.

If we haven’t actually experienced the physical desert places such as Moses wandered through, we tend to imagine them simply as empty and barren. What is interesting about Dominic’s hymn is that it suggests a parallel between ‘wilderness’ and ‘routine’, which in fact may be very full and varied – but nevertheless leaves us feeling equally disconnected and directionless.

Routine, quite as much as wilderness, can be an empty place – or, rather, a relentless ‘getting out and about’ routine can act like a smokescreen or very loud music, distracting us and others from the emptiness we feel, maybe as a result of bereavement, loss of employment or other trauma.

Not everyone responds by clinging to recognisable routine in this way, but many of us do. It gives us a toehold on what we think of as normality. But there can be something desperate about it – like clinging to a life ring: for example, when you’ve reached a certain age and become aware of the Young Turks running up the promotion ladder ahead of you.

So one of the helpful reflections in ‘O watcher in the wilderness’ is that God is surprisingly present in our routine, just as Yahweh turns out to be present in Moses’ wilderness – and not, as perhaps we feel, absent.

Dominic speaks of a God who continues to watch, to observe, within the mundane as well as the miraculous, rather as Moses’ elder sister once did, looking out for her baby brother. Having hidden him for his own safety amongst river reeds, she remained alive to possibility when it came along in the shape of Pharaoh’s daughter.

Our more usual assumption is turned on its head in a grace-filled way. We sing here not only about us, hunting out opportunities for ourselves, but of God at work seeking them out for us. Indeed, there is something of the opportunist in Jesus, with his basin and towel (John 13: 1-17), as there is in Yahweh’s appearance within the winking, flickering flames. On each occasion, God takes advantage of the moment and challenges Moses, Jesus’ disciples, us, to serve as we’ve been served and, in the serving, to overcome any fear we hold on to.

There is gift in this because, despite our best intentions, some routines can have the effect of pulling us away from looking out for others or even, at times, for ourselves. There is also challenge, because to accept any gift of opportunity is to turn from inaction to action; it is to start walking, quite possibly at the very moment when it take most effort to do so.

Permeating all, however, is the presence of a divine comfort, God-as-Watcher, beyond as well as within our routine. In his original version of this hymn, Dominic’s third verse began, ‘O Guide and Comfort, barefoot God’ – an arresting image that echoes the stories of Moses and Jesus in the earlier verses and suggests human vulnerability. But, as Dominic says, the ‘barefoot’ image may also conjure up something of God’s present and watchful Spirit– “treading lightly, even perhaps tip-toeing among us, yet ready to bestow upon us a powerful experience of God in absolute, 'un-shod' authenticity.”