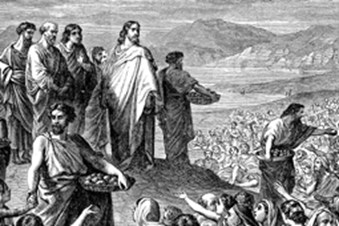 Feeding of the Five Thousand (© 2016 Thinkstock UK, a division of Getty Images)

The crowd had listened to your word,
with love their hearts and minds were fired.
The miracle of what they heard
still kept them close, though hungry tired.

As daylight left the crowded slope,
you saw their simple, human need;
sent Andrew and the rest in hope,
to find, to gather and to feed.

The smallest gift a child could share,
some bread, two fishes, simple food,
broke in your hands to love and care,
to feed the hungry multitude.

Like Andrew, now we turn to seek;
earth’s hunger haunts us, stark and real;
we fear the gifts we find too weak
the world’s distress to touch and heal.

Now send us, searching for the gift
that hides in every human heart,
that in your hands sin’s power can shift
and break the dread of death apart.

Use us, your friends, to seek and trace
the gift that seems the smallest worth,
to shape the miracle of grace,
the love to feed a hungry earth. 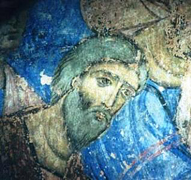 St Andrew (detail of the fresco from the Kintsvisi monastery, Georgia)

Anna’s text reflects on Jesus’ feeding of a great multitude of people who have followed him into the hills to hear him teach. The story occurs in all four of the New Testament gospels but in the Gospel of John it is the disciple Andrew who has the idea (though not with any great conviction, it has to be said) of introducing Jesus to a boy who has brought with him five loaves of bread and two fishes:

“One of his disciples, Andrew, Simon Peter’s brother, said to him, ‘There is a boy here who has five barley loaves and two fish. But what are they among so many people?’” (See John 6: 5-15)

The hymn focuses on the “simple human need” that Jesus addresses (v.2). Similar needs exist throughout our modern world, Anna says, but she understands how we might relate to Andrew’s feelings of not being up to the task. Like Andrew, we may be concerned that the gifts we can offer are “too weak” in the face of the world’s distress. (v.4)

Anna’s hymn makes of St Andrew a model of the Christian seeker – looking for ways to express God’s love even from the smallest opportunities and in the unlikeliest places. He is a disciple who, rather than dismiss what is before his eyes, turns first to Jesus and asks: “What do you think?”

What are we to do but to seek out gifts, however small, and allow them to be used to shape the “miracle of grace” (v.6), which is how we may describe the story that John tells. These are physical gifts but also gifts of the heart – the belief that God can do far more than we can achieve on our own.

Marjorie Dobson echoes this idea in her hymn A rich young man came seeking (StF 243). In v.3, she describes the feeding of the multitude and concludes:

That simple gift was offered
then multiplied by grace.

Discover more Hymns about the ministry of Jesus.