Leadership on a Journey

The Revd Dr Jennifer Smith, Superintendent Minister at Wesley’s Chapel & Leysian Mission in London, explains how an encounter outside the Chapel has shaped preparation for the ‘Leadership on a Journey’ exhibition, celebrating Black British, British Asian, African, West Indian, and other global diaspora leaders at the Museum of Methodism.

A few weeks after the statue of Edward Colston was thrown into Bristol Harbour, and ‘Black Lives Matter’ came back into the headlines, I came out my front door to find a boy of about 12 or 13 in smart school uniform stood looking up at the statue of John Wesley in our forecourt.  He had his feet planted apart and was staring hard up at the statue, giving it a classic one finger salute.  After a few seconds he nodded and turned away.  I fell into step with him as he left the courtyard.

‘Can I ask, are you just having a bad day, or did John Wesley do something special to p**s you off?’

I leapt to John Wesley’s defence: ‘As it happens, he was not – he was an abolitionist - the last letter he ever wrote was to William Wilberforce,’ I said.  The boy looked at me sideways, and paused. ‘Well that might be so, but I still didn’t like the way he was looking down at me.’ 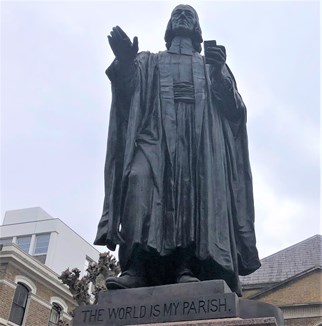 This encounter has shaped preparation for the ‘Leadership on a Journey’ exhibition, celebrating Black British, British Asian, African, West Indian, and other global diaspora leaders at the Museum of Methodism.  We are gathering nominations now, preparing for the exhibition to be opened by our new President Sonia Hicks this September.

Who should be in the exhibition?  That boy in the courtyard stays in my head as our target audience: engaged, thoughtful, and unwilling to accept uncritically the heroism with which we memorialise any people in our past.  And also deprived of the whole picture, not least because our public memorials show so few of our leaders of colour.  Our responsibility as a Museum is to give all of us a fuller sense of history to help us navigate the future.  This is heritage as mission, and deeply about forming and re-forming Methodist identity to resource our mission today.

We want to hear from around the Connexion nominations of who should be included in the exhibition – living Methodists or those of the recent past, big names and unsung heroes.  All nominations will be referenced, but for 12-15 individuals we will display objects, story, photos, and where possible video or other media to celebrate their leadership as part of Methodist history.  We will ask question about what leadership is, and how Methodists of colour have exercised it not only in the church, but in service, politics, art, academia, and other walks of life.

And this autumn, God willing, you can visit the Museum of Methodism in person or virtually: reclaim the deep history of global Methodist leadership, including artefacts from Antigua, China, the Gold Coast (Ghana) and many from Great Britain – including John Wesley’s own shoes and belongings, alongside the boots Inderjit Bhogal wore to walk from Sheffield to London during his Presidential year.  Make a nomination, don’t wait!

The exhibition will take place between 5th September and through Black History month until 26th November 2021.