On the 22 April 1993, Stephen Lawrence, a black teenager who lived in South London, was killed in a racially motivated attack. His murder and the failings of the subsequent police investigation opened the country's eyes to the extent of racism in the UK.

In this blog to mark Stephen Lawrence Day, Bevan Powell, the Connexional Equality, Diversity & Inclusivity officer, considers the on-going work to make society a just place for all and the impact of the recent government report on racial disparity.

The 22nd April each year marks Stephen Lawrence Day, established by the then Prime Minister Theresa May in 2019. The day is dedicated to Stephen’s memory and presents an opportunity for us all to reflect upon the progress of race equality in society and indeed within the Methodist Church. For me, the day provides an opportunity for each of us to reflect on our own efforts to make society a fair and just place for all. Dr. Martin Luther King said the following during his iconic speech at the march on Washington DC on August 28th 1963, “ I have a dream that my four little children will one day live in a nation where they will not be judged by the colour of their skin but by the content of their character”. But as we prepare to commemorate Stephen’s life, just how far have we come in terms of race equality in the UK?

My question to you reading this blog, is what will be your legacy in bringing about the changes we all wish to see within the UK?

As the son of parents from the Windrush era, my lived experience has fuelled an acute awareness of the struggle for race equality within the UK. Throughout my working career I have actively challenged racism within our society. First within the Metropolitan Police, then as a local Labour Councillor and now as the Equality, Diversity and Inclusion Advisor to the Methodist Church in Britain.

As one of the founders of the National Black Police Association, I have worked with Police constabularies across the UK and with Government to identify, understand and address racism. Having given both written and oral evidence to the Macpherson Inquiry into the death of Stephen Lawrence in 1998, I’ve since given evidence in February 2019 to the Home Affairs Select Committee Inquiry into ‘The Macpherson Report – Twenty years on.’ In presenting my evidence I asked the Committee to consider giving the term ‘Institutional Racism’ a legislative footing as part of the Equality Act.

Given the backdrop to my career, I am astonished, dismayed and saddened that the Commission on Race and Ethnic Disparities (CRED) report has wrongly stated that ‘one of the key justifications for the Macpherson report finding of institutional racism was the under reporting of racist crime’. On the contrary, the definition of Institutional Racism centred on the fact that the Metropolitan Police completely mismanaged the investigation into Stephen’s murder and as a result, tragically the Lawrence family are still awaiting justice. The CRED report both undermines and denies the experience of racism of black and minority ethnic people in the UK, it also reduces experiences of racism to ‘a fatalistic mentality’.

Whilst the world welcomes the guilty verdict in the trial of Derek Chauvin following the murder of George Floyd, there is a recognition that the verdict defies historical patterns of jury decision making in cases following the deaths of African American people at the hands of white police officers.

The death of George Floyd inspired international protest and underlined the importance of our Church strategy in tackling racism and all forms of discrimination. The CRED report must not be allowed to impede the Methodist Church’s programme of work defined through its strategy for ‘Justice, Dignity and Solidarity’, which I believe to be a watershed moment for the Church.

The Methodist Church has already defined racism as a sin and contrary to the imperatives of the Gospel. As Methodists we are called to challenge injustice, let’s continue to do so.

A prayer for  Stephen Lawrence Day from Bevan Powell, the Connexional Equality, Diversity & Inclusivity officer;
You can watch a video of the prayer here.

God of all love and justice, we thank you today

for Stephen Lawrence and for all those who have faithfully acted to bring about positive change in his memory.

to bring about justice for their son, Stephen. We confess to you that we have not done enough as Christian people,

to fight for the kind of justice you would want; We have not loved each other as you have commanded

We have not been actively anti-racist in the way that is true to our calling as disciples of Jesus Christ;

We pray that you support Stephen's family this day and every day.

We pray that you support the Stephen Lawrence Day Foundation in their work to inspire a more equal, inclusive society, and to foster opportunities for all marginalised young people in the UK.

May we also do our part in creating a society in which every child can flourish and reach their full potential.

A prayer for Stephen Lawrence Day from Revd Helen Watson, Superintendent Minister at Trinity Methodist Church, Plumstead, where a glass panel celebrates Stephen's life;
You can watch a video of the prayer here. 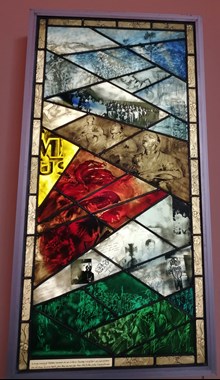 On this Stephen Lawrence memorial day, we pray for peace and understanding between races and cultures.

We pray that all your children may come and go in safety.

We pray for the perpetrators of racial violence and hatred and ask that they may learn to see all people as sisters and brothers.

We pray for families torn apart by the violence of others and ask for comfort and help for them in times of need.

Help us all, O Lord, to support and care for one another as we travel through this life together.

In the name of Christ we pray.


Back to The Methodist Blog