The Scar of Bethlehem

By Angleena Keizer Mission Partner in the Holy Land

Stand up and lift up your heads, because your redemption is near
Luke 21:28

I had been filming at WI’AM Conflict Restoration Centre, which is situated in the shadow of the separation wall. We were filming in advance for the first Advent, reading Luke 21:25-36 under the fig tree. Zoughbi Zoughbi the founder and Director of the Centre, was sharing some reflections.

After filming we sat beneath the walnut tree with the staff, sipping sweet chai tea, when we noticed a couple of tourists, a rare sight in these days. They were walking and looking at the many art works displayed on the 25 ft wall. We invited them to join us for tea  and they explained they had recently arrived from Belgium.

They had visited the Church of the Nativity, and wanted to view Banksy’s artwork on the separation wall. After hearing about the work of the Centre, taking the opportunity to view the art work and wall from a higher vantage position, they left with instructions where to find Banksy’s artwork.

In case you’ve not come across Banksy, he is a famous but anonymous graffiti artist who carries out his art in public places and then reveals it on his social media feeds. He started out in his home town of Bristol in the 1990s, but now his artwork is seen all over the world and sells for millions at auctions.

His art delivers political messages on contemporary themes. One of Banksy’s many installations in Bethlehem, the ‘Armoured Dove’, is opposite WI’AM under the gaze of the looking military watchtower. The Dove has its wings wide open and carries an olive branch in its beak:  the symbol of peace.

The dove is wearing an armoured vest with a target on its chest.  Banksy has for over a decade displayed many pieces across the West Bank, and Gaza, highlighting the reality of life for Palestinians living under occupation. He has used his work in a positive way seeking to attract tourism especially to Bethlehem.  In 2017 he opened the unique Walled Off Hotel, a ten room Boutique HotelIt is situated a few metres from the wall, and is described as having ‘the worst view in the world’.

The hotel is unique and depicts many of Banksy art throughout the rooms. Not only did thousands come to view it pr-covid but also to stay, creating job opportunities for the locals. Banksy recently sold one of his paintings ‘Mediterranean Sea View’ for £2.3 million, with the proceeds  being donated to the Bethlehem Arab Society for Rehabilitation Hospital. A place I know well and where I had a stent procedure. He continues to donate to hospitals in Bethlehem by selling his art, bringing hope and light to those in need. 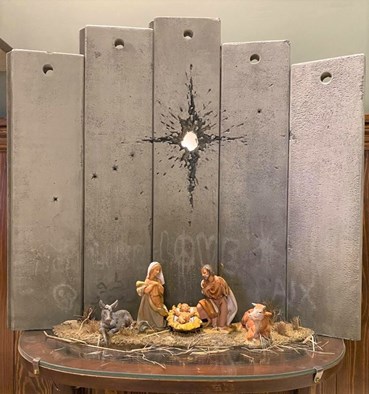 In December 2019 a new art piece was installed in the hotel, the ‘Scar of Bethlehem’ which shows the nativity scene below the separation wall. (see image credit Usama Nicola) On the wall is what appears to be a pierced blast which has created the shape of a star. Banksy called it a “modified nativity”. There are the words ‘love’ and ‘peace’ written in English and French, with three wrapped presents.

During covid an exhibition was staged in order to surprise Banksy, by displaying 20 photographs by locals of his work in Manger Square, as a thank you for his work that has helped to diversify tourism in the City. The people of Gaza contributed by carving ‘Thank you’ in the sand on the sea shore. It was the Palestinians’ way of saying that they were grateful for Banksy’s support.

In the reading from Luke, Jesus warns his disciples to read the signs of the times. He told his disciples when you see these signs, nations rising against nations, earthquakes, famines fearful times etc, he said “stand up and lift up your heads” Zoughbi shared that Palestinian followers of Christ continue to ‘watch’ and ‘wait’.

To keep their trust in the one who was born in Bethlehem who brings light into darkness. That the words of Jesus this Advent “stand up and raise your heads” is an inspiration to keep looking towards the Light of Christ. Banksy is able to read the signs of the times and stand up using his art to speak out against injustice, using his gift of art to bring hope and light.

As we journey through Advent towards the nativity ‘watching’ and ‘waiting’ may we remember the  message of the ‘Scar of Bethlehem’ and hold on to the ‘star of Bethlehem’ our Lord Jesus Christ. May His Light continue to shine in us bringing love, peace and hope.

Christmas blessings to you and yours from Bethlehem