“The harvest is plentiful, the labourers are few; therefore, pray earnestly to the Lord of the harvest to send out labourers into his harvest”

The Tent of Nations is a peace building project located at Daher’s Vineyard, a family organic farm in the hills south-west of Bethlehem. Over recent years Angleena Keizer, Methodist Mission Partner in Jerusalem, has visited the Nassar family who own the land and who oversee the Tent of Nations. Angleena reports on the family’s continued struggle to exist following decades of intimidation and, most recently, an arson attack which devastated large swathes of their land. 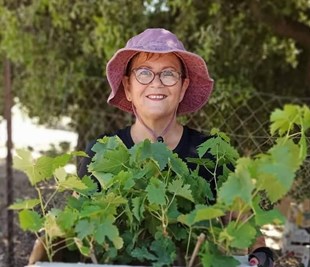 The story of the Nassar family farm, known as the Tent of Nations, goes back over a hundred years, when the grandfather of the Nassar family legally purchased the land during the Ottoman period in 1916. The farm was quickly established with the planting of fruit and olive trees and grape vines.

Bringing in the harvest on the farm

Through the interceding century the family have been required to re-register and update land ownership documentation as the political situation in the area changed.

When portions of the West Bank, including the Nassar family farm, were declared as “state land” in the early 1990s, the family started to experience prohibitory restrictions on the use of their land by the Israeli authorities, The farm is now surrounded by three illegal Israeli settlements. And while the Nassar family have been forbidden to build structures above ground, have electricity or running water, these neighbouring settlements all have these amenities, as well as connecting roads.

Looking over towards the settlements

The family have fought their case in the Israeli courts at enormous cost. They have found creative ways of continuing the farm by building underground cisterns to contain rainwater, as well as installing solar panels for electricity. The Israeli settlers have offered to buy the farm but the family say, “we don’t have the right to sell our inheritance”.

Demolition orders, even on the dog kennel, as well as harassment, attacks and intimidation have continued. As a family, they discussed how they would respond to these experiences and came up with the following four principles:

The Nassar family chose to use their energies in a positive way. Daoud Nassar, the family spokesperson, says, “When you stand up and act, you empower yourself, and you help empower others”.

Over the years the Tent of Nations and the Nassar family have attracted thousands of visitors from around the world, many returning to work on the land as volunteers. They come to learn, to share, and to offer their solidarity. The visitors have ensured – through their donations as well as being a presence on the farm - that the Nassar family farm continues to exist. Their situation has caused international awareness of their plight, and also that of the Palestinians, in general, who are also fighting similar land issues with the Israelis.

Over the past three years, I have had the opportunity to visit the Nassar family at the Tent of Nations many times.  It is a place of beauty with stunning views towards the Mediterranean Sea.  I have met with many groups and volunteers and listened to Daoud share his family’s story. The shock is always palpable but balanced equally by the inspiration of how they have chosen to respond to the daily injustices they face.

I was there with the World Methodist Council delegation when the family became the recipients of the Methodist World Peace Prize award in 2018 for recognition of their peaceful and non-violent ways of responding to violence and injustice.

A few months ago, I stood again in shock and silence, witnessing devastation as far as the eye could see, caused by a recent arson attack on their land. The rancid smell of smoke still hanging in the air permeated my nostrils. Standing in utter disbelief, and wandering around with Daoud as he showed us the remains of destroyed fruit trees, I was left speechless as I recalled what the Nassar family has gone through over the years.

As I observed the dark ashes still smouldering on the land days later, and thought of the many visitors to the farm pre the world pandemic we are now experiencing, I felt overwhelmed.

There have been no tourists to the Holy Land since the pandemic began, and equally, there has been no international presence here as there once had been. The family has been facing further harassment, uncertainty, pressure and now this devastation. We heard that it took eight hours to put the fire out, with limited resources.  It had taken the Palestinian fire crew from Bethlehem hours to be able to respond, all the while, the Israeli fire crew stood by and watched, prepared to put the fire out only if it moved in the direction of the nearly settlement.

My heart boiled over with both anger and sadness, but started to soar when I heard that no one was harmed from the family, including children who were helping to put the fire out. Although the fire came right up to some buildings, animal pens, and vehicles, no structures, animals nor people were harmed, because the wind changed direction and they were all saved. We started to thank God for His protection.

Some weeks later, I received another call to go quickly to the farm. We were unable to get on the farm whilst the Israeli soldiers had entered with their military vehicles and cut down over fifty olive trees. As we stood once again on their land observing destruction by others, I witnessed for the first time a feeling of giving up.  Then within minutes the peaceful fighting spirit of Daoud returned as he said “we will rise up” - not with arms, but by getting back on the tractor and starting to plough the burnt ashes and clearing the damaged land.

Harvested grapes at the farm

Along with my colleague from the Presbyterian Church in the USA, we were able to do what many desire to do and cannot at this moment in time - to be in solidarity with the family.  We were able to help Daher plant and water new vines, and pick the year’s grape harvest.  We all worked hard together for eight hours under a blistering, hot sun. Unfortunately, on the lower slopes of the hillside, some of their harvest had been stolen.  We needed to get the job done before the perpetrators returned.  The theft had been reported to the Palestinian police, who came out to the farm in response. They sat in their vehicles and watched us, one commenting “put your hat on”!  In time, the same policeman came to help us load the harvest onto the tractor. That’s what the inspiration of the family does to others; their refusal to be enemies towards those who cause them harm. We witnessed once again their perseverance and determination to respond in non-violent ways.  Their neighbour commented, “you Christians never retaliate!” No wonder the Nassar family was awarded the World Methodist Peace Prize award!

The harvest was plentiful, thank God, but the labourers were few.  Please continue earnestly to pray with us during this devastating period of the pandemic, that tourism will once again resume to the Holy Land; that groups and volunteers will be able to return to support the economy and be a presence once again to stand with the Nassar family and others in great need, while struggling with injustices in a non-violent way.

Until that time, we continue to stand on your behalf in person with the family, hoping that next month we can join the olive picking, praying for a successful harvest, Inshallah – “God willing”!

Thank you for your concerns, prayers and donations supporting the Nassar family. Find out more about the Tent of Nations here.