It was on a train journey from London to Chesterfield in 1979 that the Revd Brian Hoare wrote his hymn "Born in Song". Inspired by the opening sentence of the preface to the 1933 Methodist Hymn Book (“Methodism was born in song”), Brian traces the connection between worshipping together and the task of spreading the Gospel story:

“Tell the world! All power to Jesus is given… Spread the word, that all may receive him; every tongue confess and sing his praise.” 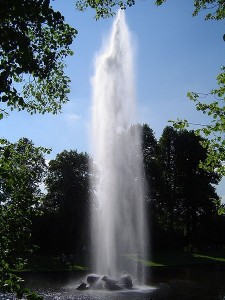 
At the time, Brian was serving on the committee producing Hymns & Psalms, the predecessor to Singing the Faith. He was also on the staff of Cliff College, an Evangelical Bible College in Derbyshire. From his home nearby he could see, up on the hills of the Peak District, one of England’s finest stately homes, Chatsworth House, from which the hymn's tune takes its name. "The melody includes some big ‘jumps’ or ‘octave leaps’," Brian says, "which are symbolic of the huge fountain in the historic house’s grounds."

Brian writes both words and music for hymns (I am the bread, StF 587, is another example). “I trained as a musician and first began by writing tunes to other peoples’ words. However I increasingly found myself thinking: ‘If I’d written that I would have said it a bit differently’. And so I started writing words of my own.”

Both words and music of "Born in Song!" were written in a couple of hours on the train. The hymn was first used as part of an event (called "Born in Song") to celebrate the 200th anniversary of John Wesley’s visit to Sheffield. It has since become a familiar expression of Methodist values and the powerful Methodist tradition of singing our faith.