Called by Christ to be disciples

See suggestions in Beyond these walls of worship (StF 547). 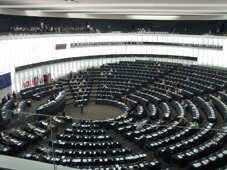 David Hallam's election as a member of the European Parliament (seen here in July 2006) provided the inspiration for this hymn (Photo by JLogan, Wikimedia)

In 1994, David Hallam was elected as a Labour member of the European Parliament, where he was to serve for the next five years. David was a member of the same church congregation as Martin Leckebusch and Martin found himself asking the question: What’s it going to be like for David as an MEP in Europe? How will he be a Christian disciple in that new role?

Like Paul Wood and Ian Worsfold (Beyond these walls of worship, StF 547), Martin started to reflect on the different roles that individual members of a congregation fulfil in their “day jobs” and how these may become part of their Christian calling:

so in government or commerce,
college, hospice, farm or home,
whether volunteers or earning,
may we see your kingdom come.
(verse 2)

In verse 3, Martin states that when we serve God in our daily lives, “secular is turned to sacred”. This is not, as one might read it, a declaration that God is not present in the secular world. Rather, Martin says (quoting the Christian speaker and author David Pawson), “there is nothing secular except sin”. To speak of God’s creation is to “cover all of it – not just the spiritual bit on a Sunday”.

Read more of Martin’s reflections on “Sunday and Monday” in Taking a broad approach – the hymn writing of Martin Leckebusch.