God! As with silent hearts we bring to mind

Fred Kaan was a writer much concerned with issues of peace and justice. “God! As with silent hearts we bring to mind” is forthright in its condemnation of war – “hate and war diminish humankind” – but sensitive in its recollection of “the lives of those who gave and give their all”.

The hymn was commissioned by Coventry Cathedral as a text that would supersede the traditional Remembrance Day hymn, O valiant hearts by John Arkwright – which has an altogether different tone, indicative of its age: 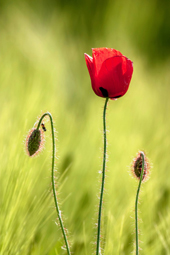 "... teach us to coax the plant of peace to flower" © 2014 Thinkstock UK, a division of Getty Images

O valiant hearts who to your glory came
Through dust of conflict and through battle flame;
Tranquil you lie, your knightly virtue proved,
Your memory hallowed in the land you loved.

Arkwright’s words are humane, but the language of stoic triumph and the use of “Victor” to speak of Jesus on the cross is far removed from Fred Kaan’s

So, Prince of Peace, disarm our trust in power,
teach us to coax the plant of peace to flower. (v.4)

Fred’s text was to be sung to the tune associated with the earlier hymn, “Supreme Sacrifice” by Charles Harris – the tune also used in Singing the Faith. It was first sung in a broadcast service on Remembrance Sunday 1989.