God, whose farm is all creation 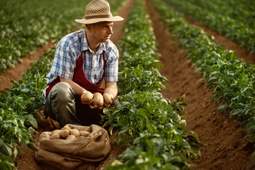 In the way that this hymn shifts the emphasis  from the harvest crops themselves to the tasks undertaken (and effort required) to grow and distribute them, John Arlott invites a discussion about the tasks that each of us undertake as our personal “harvest offering”. It is also a question for small groups or church congregations.

Consider singing or saying this hymn and then inviting such a discussion. You may wish to ask members of a congregation to reflect on the hymn in pairs (and perhaps to feed back); or it may be the basis of a small house group conversation. Speak or sing the hymn again following the discussion in order to experience the words in a new way. 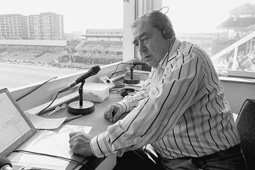 Best known as a cricket commentator for BBC radio, and also as a food and wine expert, John Arlott was invited to write this hymn for the 1951 BBC Hymn Book. It was to be one of four; one for each of the agricultural “festivals” – Plough Sunday, Rogation Sunday, Lammas and Harvest. However, it is this one (sometimes known as “God’s Farm”) that has taken hold most firmly.

The simplicity of the words, as the editors of the Companion to Hymns & Psalms observed, conceals “a fruitful connection” between God as carer and provider and humankind as workers and worshippers. It is not the harvested crops themselves that are offered to God but “our labour, all our watching” (v.3). Moreover, the crops themselves are grown – in a phrase that many an aid agency would wish to echo – “that all may live” (v.1).

In a memorable “twist” in the hymn’s final line, we are reminded that the activity and care that we bring to cultivating the land (the ploughing, seeding, reaping, hopes and fears of verse 2): “they are our prayer”.

John Arlott first joined the BBC as the result of his abilities as a poet. John Betjeman, later Poet Laureate, became his mentor and was instrumental in Arlott’s career switch in 1945, from the police force to radio broadcasting as poetry producer of the World Service’s Eastern Service. As a sports commentator he was remembered, at his death in 1991, as the “voice of summer”, with a “rich Hampshire burr, rare gift of description and original turn of phrase”. He had also become known for speaking out against racial and class discrimination in cricket.

His four hymns for the BBC Hymn Book (only three were published) came about seemingly as a last ditch attempt by the book’s editors to find a writer who would address the subject of harvest and the agricultural festivals. “Some of the best poets” had already been approached but their efforts had been deemed unsuitable. Arlott wrote his texts quickly, allegedly overnight, but despite the popularity of this one, he never wrote another hymn.