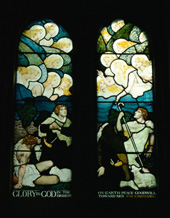 Surprised by angels © 2015 Thinkstock UK, a division of Getty Images

It is often said that Methodists sing their theology or, more generally, that our hymns are our “sung theology”. Nowhere is this more evident than in some of our most popular Christmas carols. Why not take time, either on your own or in a group, to read slowly some of these carols that perhaps we take for granted. “Hark! the herald-angels sing” would be a good place to start.

Also see Hymns to build worship around. (#5 "Preaching on hymns")

The original version of this hymn consisted of ten four-line verses and was titled “Hymn for Christmas Day”. Here, Charles Wesley achieves some of his most memorable poetry:

God and sinners reconciled…
Veiled in flesh the Godhead see!...
Light and life to all he brings…
Mild he lays his glory by… 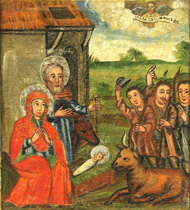 These are phrases that stay in the mind and the heart – and achieve Wesley’s intention of expressing the mysterious theology of God’s incarnation. In this task, “Hark! The herald-angels” is rivalled for concision and beauty only by his own Let earth and heaven combine (StF 208). But, where that hymn builds in excitement, leaving the poet almost speechless at its conclusion (“his love shall then be fully showed, / and we shall all be lost in God”), this carol bursts with joy from its very first words:

Hark! The herald-angels sing
glory to the new-born King.

Where “Let earth and heaven combines” explains the incarnation for us, “Hark the herald-angels” seems to enact it. There is no preamble, no need to set the context. At once, we are with the shepherds on the slopes below Bethlehem, hiding our faces from the sudden glare of angelic brightness, then emboldened to run into town to find “the incarnate Deity, pleased as man with men to dwell.” (Luke 2: 2-18)

There have been occasional queries about that phrase “as man with men”. Surely it should be “as man with man”, some ask. (Though for some, a more inclusive version would be preferable to either.*) In fact, the hymn, which originally appeared in Wesley’s Hymns and Sacred Poems (1739), has been edited in several ways over the years. Most significantly, in George Whitefield’s Collection of 1753, the last four of Wesley’s four-line verses were omitted – these explore the idea of Jesus as a “second Adam”. Later, the remaining words were arranged into the three longer verses we sing today.

Regarding “man and men…”, later versions changed this to “man with man to dwell” and its rhyming couplet to “Jesus, our Emmanuel”. In fact, Wesley’s original reads:

Pleased as man with men to appear,
Jesus! Our Immanuel here!

The original “men” has been restored in Methodist hymn books since 1933 and has been retained in Singing the Faith.

* One inclusive version reads: “Pleased, as flesh, with us to dwell, Jesus, our Emmanuel” 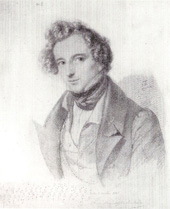 Mendelssohn didn't think sacred words would be a good idea

Famously, the melody that has become inextricably associated with Charles Wesley’s words was written originally by Mendelssohn for inclusion in his Festegesang (1840), a cantata celebrating what was thought to be the four hundredth anniversary of the invention of the printing press by Johannes Gutenberg. For “with the angelic host proclaim” read: “Gutenberg, der deutsche Mann”. The cantata itself was scored for male chorus with two brass orchestras and timpani.

The tune was adapted in 1856 for use as a hymn by W.H. Cummings, then organist at Waltham Abbey. Some years before, however, Mendelssohn had written to his English publishers about finding alternative words to the tune:

If the right ones are hit at, I am sure that piece will be liked very much by the singers and the hearers, but it will never do to sacred words. There must be a national and merry subject found out, something to which the solder-like and buxom motion of the piece has some relation, and the words must express something gay and popular as the music tries to do it.