It came upon the midnight clear

Verse 1 of this hymn evokes for us the vision of angels bringing good news to shepherds, looking after their sheep on the fields beyond Bethlehem. It is one of the quintessential Christmas scenes. Yet, read verses 3 and 4 first, and the hymn takes on a different kind of character – a promise of peace and justice for which the “angel strain” was just the springboard. As the notes below explain, this carol “is not just for Christmas”.

This hymn was written while Edmund Hamilton Sears was minister of the Unitarian Church in Wayland, Massachusetts, and published in the Christian Register, Boston, for 29 December 1849, in five verses. Sears later included it in his own collection, Sermons and Songs of the Christian Life, published in 1875, the year before Sears died. 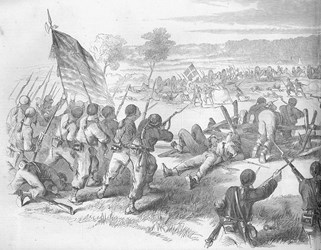 In Stories behind the hymns - why they matter, Mark Woods writes that Sears “was an oddity in being a Unitarian minister who believed in the divinity of Christ, but it's the date of the hymn that strikes us. It was written in 1849, the year after the Communist Manifesto was published and revolutions swept the old order from power in many European countries. America had just fought a war with Mexico that Sears believed was unjust, and he foresaw with dread the Civil War that lay just ahead (image right). So he writes of the 'two thousand years of wrong' and the 'men of strife' with his eyes open and his heart sore, but he still believes.”

The editors of the Companion to Hymns & Psalms, Singing the Faith’s predecessor hymn book, reinforce Mark’s point. They note that “the original is not really a Nativity hymn, but an ethical song extolling the worth and splendour of world peace, based on the song of the angels in Luke 2: 14.” Though nowadays we look for the hymn in the Christmas sections of our hymn books, when it first appeared in England, in the Hymnal Companion to the Book of Common Prayer (1870), it was placed in the section headed “The Church Triumphant”.

The Companion editors go on:

“. . . its social message is surely as urgent now as when it was written. The third verse especially (“Yet with the woes of sin and strife…”) reflects the widespread unrest consequent upon the gold rush and the passing of the fugitive slave law in the United States (see image below), the Chartist movement in Britain, and the political revolutions in Germany and France. Ironically, in America the gathering storm-clouds erupted a dozen years later in the Civil War.” 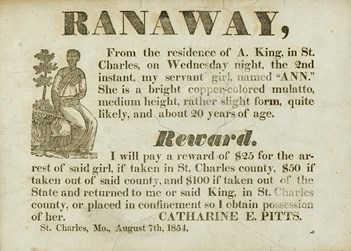 It is interesting that the editors of both Hymns & Psalms and Singing the Faith chose to remove the hymn’s fourth verse (included in the 1933 Methodist Hymn Book), which points directly to the plight of slaves, the socially disadvantaged and all those for whom day-to-day living is – for whatever reason – a hard task. Perhaps it was not considered “Christmassy” enough; yet it is for all these and more that the Incarnational event took place.

And ye, beneath life’s crushing load,
Whose forms are bending low,
Who toil along the climbing way
With painful steps and slow -
Look now! For glad and golden hours
Come swiftly on the wing:
O rest beside the weary road,
And hear the angels sing.