Jesus, tempted in the desert 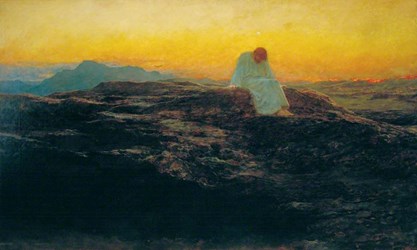 This is a hymn that is particularly helpful during the season of Lent, but it can be used on any occasion to reinforce the Gospel narratives of Jesus’ temptations in the desert (see below).

Also see other hymns that re-tell stories from the life of Jesus: Jesus' ministry 2 - Events in Jesus’ life.

“Jesus tempted in the desert” is just one of two hymns in Singing the Faith that follow the narrative structure of the gospels’ re-telling of this story (Matthew 4: 1-11 and Luke 4: 1-13). The other is Timothy Dudley-Smith’s Christ our Redeemer knew temptation’s hour (StF 235).

Stuempfle’s text differs from Dudley-Smith’s in the way that he closely paraphrases the dialogue between “the tempter” and Jesus. Michael Hawn points out that this reflects the Lutheran tradition, in which “one would both hear and sing the gospel”. As we sing, we remind ourselves of what we’ve heard – or remember – of the gospel story.

Hawn goes on to say that “the fourth stanza reveals Dr Stuempfle as a preacher. This stanza offers the ‘So what?’ or the hermeneutical application of the passage to the life of the singer.” We acknowledge that Jesus faced temptations, just as we do, so we pray for God’s protection “lest we fall, your trust betray”.

In one sense, this is a simple hymn; we might call it a teaching hymn in the manner of children’s hymns, old and new, that recount biblical stories in memorable form and identify the lessons within them.

At the same time, it is a strong statement of the central relationship into which we enter as Christians, in which we invite Christ to “come and be our living bread” (an echo of John 6: 35). We are to listen out for the one who embodies God’s Word and models for us God-centred living.  Jesus “talks down” temptations that, in their many guises, divert us from such a life.

There is a reminder here of the context in which we all live, described in O Jesus, I have promised (StF 563): “O let me feel you near me; the world is ever near; I see the sights that dazzle, the tempting sounds I hear.” (v.2). And the hymn’s closing prayer is a response to the exhortation in At the name of Jesus (StF 317):

Crown him as your captain
in temptation’s hour:
let his will enfold you
in its light and power.

(Comments by Michael Hawn drawn from his "history of hymns" articles for the United Methodist Church: Jesus, tempted in the desert.)