My Lord! what a morning

The tradition of singing spiritual songs that arose amongst the slaves of America is not highly represented in Singing the Faith. However, My Lord! What a morning, which has appeared in a number of hymn books since the early 1950s, is one example. (It has been recorded by artists as varied as Harry Belafonte, Joan Baez and The Seekers.)

“Spirituals” (not always regarded as “hymns”) were often sung as work songs, to aid hard labour: they also expressed personal feeling and offered encouragement, inspired by a message of God’s saving grace. Like other spirituals, My Lord! reflects the lives of slaves both in its religious aspiration and its coded messages. 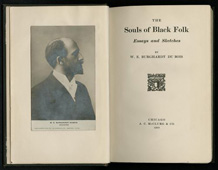 In his important book, The Souls of Black Folk : Essays and Sketches, civil rights campaigner W. E. Burghardt Du Bois described the “melody of the slave songs,” or the negro spiritual, as the “articulate message of the slave to the world”: the music “of an unhappy people, of the children of disappointment; they tell of death and suffering and unvoiced longing toward a truer world, of misty wanderings and hidden ways.”

The online edition of Du Bois’s book suggests a variety of meanings for this particular text:

“The text can mean either morning (the beginning) or mourning (the end). It refers to the morning when the dead will be raised, or the slaves emancipated, but also the false dawn of reconstruction failed. The trumpet sounds will wake the nations of "underground" Americans both black and white to challenge racism and segregation. The metaphor of falling stars may stand for the Union Army's campfires, the beacons of freedom, or perhaps the great black men whose spirits flash like falling stars in The Souls of Black Folk, a usage that may be traceable to the Kongolese belief that falling stars are "spirits flashing across the sky." (http://way.net/SoulsOfBlackFolk/02MyLord.html)