O love that wilt not let me go

A hymn of reassurance in times of sorrow, Erik Routley called George Matheson’s most famous hymn a “devotional masterpiece”.

Read The Advent hymn we do not sing. Take time to reflect on the possibility that this hymn reflects not only the persistent love of God but implies, equally, the very great value that God places on each individual human being.

How does Matheson’s deeply personal hymn echo the ideas expressed in Charles Wesley’s Advent and Christmas hymns such as Come, thou long-expected Jesus (StF 169) and Let earth and heaven combine (StF 208). Do Matheson’s words add to Wesley’s understanding of God’s incarnation? 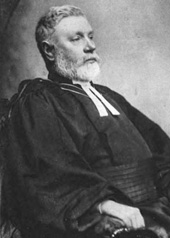 George Matheson was born in 1842, the son of a Glasgow merchant. By his late teens he had lost virtually all his eyesight but nevertheless had a brilliant academic career at the University of Edinburgh. In 1868 he became the parish minister of Inellan on Clydeside in Argyll, later moving to St Bernard’s in Edinburgh. In 1890 he published Sacred Songs, which included the hymn “Gather us in, thou love that fillest all.” Pursuing his academic interests throughout his life, Matheson was a prolific author on a wide range of theological topics – from “the study of German theology” and Natural Elements of Revealed Theology (the 1881 Baird Lectures) to the spiritual development of St Paul.

From his Inellan days onwards, Matheson established a reputation as a fine preacher. Following an invitation to preach at Balmoral, Queen Victoria requested that his sermon on the patience of Job be published.

Matheson died in 1906 in the coastal town of North Berwick.

“O love that wilt not let me go” was written in 1881 while Matheson was minister at Inellan. It was composed “with extreme rapidity”, in response to real personal pain. According to one account, “it was the day of my sister’s marriage, and the rest of the family were staying overnight in Glasgow”. Recalling his own earlier broken engagement to a woman who had concluded that his blindness was a bar to their getting married, what he wrote was as much an expression of his suffering and loneliness as of his faith. The hymn was first published in 1882 in the Church of Scotland’s magazine, Life and Work.

According to the Handbook to The Church Hymnary (1927), Matheson explained that when he wrote “blossoms red” (v.4), he was thinking of the blossom that comes out of sacrifice – of the sacrificial life that blossoms by shedding itself. The line “I trace the rainbow through the rain” (v.3) recalls the climax of the Noah story, Genesis 9:13.

The tune, St. Margaret, with which this hymn has been associated ever since it was published, was written by Dr A.L. Peace (also very quickly, he recorded) while on a visit to the Isle of Arran, off the west coast of Scotland. It is named for the 11th century Queen of Scotland who was an influential benefactress of the Church.