O worship the King, all-glorious above 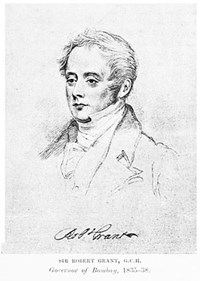 At a time when the only sung praise allowed in Presbyterian churches was metrical and unaccompanied versions of the psalms, hymns were considered to be "of human composure" (and organs were long dimissed as "a kist o'whistles" with a devil in every pipe).  Psalms, on the other hand, were regarded as divinely inspired.

Hymns didn't catch on in Scotland until the 1850s, long after the Wesleys had utilised them as part of their evanglical revival south of the border.

Grant was himself an evangelical who had been MP for the Elgin "Burghs" on the Moray coast and subsequently the Inverness Burghs. He wrote "O worship the King", which perhaps unsurprisingly is a praphrase of a psalm (Psalm 104) shortly before becoming Governor of Bombay in 1834. It was included in a volume of sacred poems, edited and published after his death by his elder brother, Lord Glenelg.