One human family God has made

NOTE: This hymn has been cleared by the author and copyright administrator, the Revd Rosemary Wakelin, for singing in church worship. This includes clearance for reproduction on local service sheets and also for projection via the Singing the Faith electronic words edition of the hymn book published by Hymns Ancient and Modern. Copyright ownership should be indicated when this hymn is reproduced.

Rosemary notes that she wrote this hymn with the tune "St Matthew" in mind (StF 162). She suggests that "Soll 's Sein" (StF 53) also makes a suitable alternative setting. Both offer a quite different tone to the words than John Bell's "The seven joys of Mary". 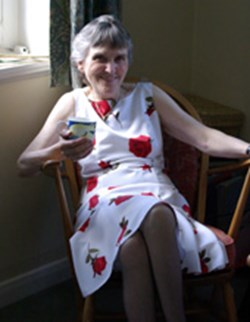 The Revd Rosemary Wakelin is a Methodist minister who has never quite managed to retire. By the age of seven she says she already knew that she wanted to be a minister. At the time, she had to be told by her mother that “they don’t have ladies”. It wasn’t until after her husband, Paul, died in 1979 that she took up the call to ordained ministry, having already spent many years as a missionary wife and teacher.

With Paul, a doctor, Rosemary worked as a mission partner in Sierra Leone, and then in Kenya in the wake of the Mau Mau uprising. “It was sometimes difficult because there would be ex-Mau Mau members who would still be carrying guns. They’d flag me down when I would drive once a week 40 miles to Meru to pick up supplies and I’d give lifts to soldiers with three kids and a Daschund also in the car.”

Back in the UK, and making a long, slow recovery from amoebic hepatitis, Rosemary and Paul settled in Norfolk: Paul as a GP, Rosemary as a teacher – first at a hospital, with children living with Downs Syndrome, and then in state schools.

Just before Paul died, he said to Rosemary, “At last you’re going to be free to do what you’ve always wanted to do”… to become a minister, which she did in the same year as her elder son, Mark (President of the Methodist Conference in 2012-13). On the cusp of retirement in Norwich, she took up a new challenge, to be the Methodist chaplain at the prison for sex offenders in the city. She discovered that as, “a small, completely defenceless woman” (she is just 5’2”), “you alter the chemistry of the place when you go in” and she has made relationships that she thinks would be more difficult for a man. She says of the prisoners, “they’re not just their crime – and a lot of them are grown-up abused children”. And she has found herself enacting the fundamental belief described in this hymn: “One human family God has made, and all for each to care.”