Praise to the God who clears the way

The words of Jan Berry's hymns are suitable as a spoken opening prayer of praise on many occasions, including Advent.

There may be an opportunity for a congregation to process into worship speaking these words; alternatively, the worship leader(s) may process in speaking verse 1, while the rest of the congregation speaks (or sings) verses 2-4.

When this hymn was suggested as one to accompany the Advent lectionary readings for 9 December 2012, Philip Baldwin wrote to say that he had been asked to use the tune "Bristol" (StF 171) – an alternative that works well, though arguably most suitable in Advent, with which it already has associations. The set tune, Norman Warren’s “Creator God”, is worth taking a little time to learn.

Jan Berry’s hymn draws upon the message of John of Baptist in e.g. Luke 3 :1-6 which, in turn, draws upon words of the Hebrew prophets e.g. Isaiah. It is a message of change, of making ourselves open to the hopes and actions of God in the world. In this way, we can begin to follow the example of God-in-Jesus, who came “to bring comfort to all who mourn” (v.4) and who shared “our suffering and our loss” (v.3).

The text echoes the commands of John the Baptist and the Hebrew prophets but with words that describe well Jesus’ mission and – as his disciples – ours too. This makes it a hymn suitable for use at times of the year other than during Advent. For example, if Lent, like Advent, is a time of getting ourselves ready for God, then here are words to remind us that God has demonstrated how to go about the task:

Praise to the God who clears the way
preparing room and space;
for power and pride will lose their sway
as peace comes in their place.

Within the context of Lent, our task is seemingly transformed in verse 3 into a hymn of Easter hope: “Praise to the God who waits with us / for hope and joy to reign”. 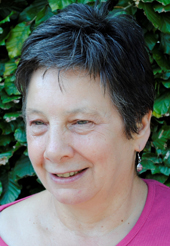 Jan is the Principal of the Open College at Luther King House Open College based in Manchester. She was ordained as a Baptist minister in 1977, and worked in Baptist/URC congregations before taking up an appointment as ecumenical chaplain at Sheffield City Polytechnic (now Sheffield Hallam University). She became a minister of the United Reformed Church and joined the staff of Northern College as tutor in practical theology in 1997.

Jan has a strong commitment to inclusive worship and liturgy. She is the author of Ritual Making Women: Shaping Rites for Changing Lives and Naming God.

For three years between 2009 and 2012, Jan was Director of the Centre for the study of Theology and Health at Holy Rood House in Thirsk. where she was responsible for setting up courses, consultations and workshops in the area of theology and health. There she also coordinated the 'hymns for healing' project.

Read more about Jan and hymns for healing.