The God who sings

With its unusual metre (4.10.10.4.), Douglas Galbraith’s poem-hymn presents a sequence of statements that at once bring to life the character of God (who sings, shouts, weeps, laughs and calls out) and represent God’s active involvement in world events and experiences.

It is a hymn that bears reading out loud or quietly to yourself, pausing to reflect on the images and implications of each verse.

Consider, too, creating prayers of intercession that use the successive verses (spoken or sung) as responses.

Douglas Galbraith’s striking text speaks of a God responding viscerally to, and interacting with, the challenges and possibilities of human existence. Fundamentally it is a hymn that expresses hope through emotion and action.

The words are a radically revised version of verses written in response to an account of a South Korean student who had died in police custody. The authorities had banned the publication of a newspaper picture of his grieving relatives ringing a bell, according to Confucian practice, at his funeral. So, the original second verse began: “Give tongue you bell! Disturb the air and stir to hope the lost. . . “

At the time he heard this story in 1989, Douglas was attending a consultation on “Inclusive Liturgy and Music” at the World Council of Churches’ Ecumenical Institute at Bossey in Switzerland. The theme of justice, peace and the integrity of creation “was very much in the air”, Douglas writes, and his text referred to this theme as well, inspired in particular by a study of the covenant in Hosea 2: 18-23.

The original first line (“The sound goes out”) referred to Jeremiah 25: 31: “The clamour will resound to the ends of the earth, for the Lord has an indictment against the nations; he is entering into judgement with all flesh, and the guilty he will put to the sword. . . “

The sound goes out!
and everywhere the news is spread of one
by whom those desperate to rule all things
are put to rout.

(See below for the complete original text.)

Douglas adds that the present text evolved from the original words, “affirming a God of feelings, of emotions, engaged in people's lives. Other material from the consultation found its way into the revision, like the worship occasion based on Sarah's laughter (verse 4 cf. Genesis 18: 12). The first line reflects the Authorised Version translation of Zephaniah 3: 17-20 ('he will joy over thee with singing').”

Douglas’s original text references other images from the worship at the Bossey consultation – of the door knock that precedes arrest, and of a woman waiting after midnight at a dry water tap:

The sound goes out!
and everywhere the news is spread of one
by whom those desperate to rule all things
are put to rout.

Give tongue you bell!
Disturb the air and stir to hope the lost
who fearful watch on mountain side or slum
or prison cell.

The empty homes
where lonely grief has wrested hope away
will open to the knocking that will say,
'The Spirit comes'.

The whole earth sings!
and gives to all their due, her plenty shares,
and those who wait for water see revive
the failing springs.

The very fields
again will answer to the hand that sows,
and, with each other, people covenant
for justice, peace.

Douglas's original tune was named after the Korean who told the original story at Bossey. It was based on the theme of the bell and Douglas considered it less appropriate for the revised words. He didn't write an alternative tune but regards Paul Leddington's Wright "Chanson" as a kind of "cousin" to his own first musical thoughts.

The above notes are adapted with permission from Douglas Galbraith’s own contribution to the 2005 book, A panorama of Christian hymnody, edited by Erik Routley and revised by Paul Richardson. 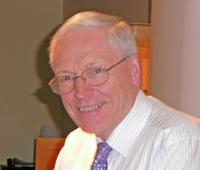 Douglas Galbraith is a minister of the Church of Scotland and a highly respected musician.

Between 1995 and 2006 he ran the Church of Scotland’s Office for Worship, Doctrine and Artistic Matters, filling the roles of secretary to the panel on doctrine and to the music panel. The latter was responsible for the production of Church Hymnary 4 (2005). Douglas founded and edited the Scottish church music magazine Different Voices (2008-11 in print form), is honorary secretary of the Church Service Society and is the author of several publications concerning music in worship. He is a former precentor of the Church of Scotland’s General Assembly and served as convener of Action of Churches in Scotland (ACTS) between 2011 and 2013.