There's a wideness in God's mercy

Ideas for use
This hymn is a helpful in reflecting the traditional Methodist emphasis on grace available for all (see below). 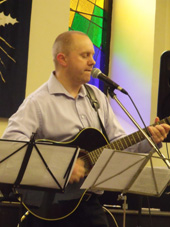 The Revd Gavin Hume has written a contemporary “folk/rock” version of the hymn with an added chorus:

Oh what grace that God has given,
wider than the widest sea.
Grace embracing all the world
and reaching out, reaching out to me.

The sheet music (lead sheet) can be downloaded from Gavin’s website at: sites.google.com/site/gavinhumemusic
The song can be heard, along with a video with the words, on youtube
Download the music track here.
Permission is granted for this song to be freely used in the context of worship.

More information
There is general agreement that from the longer and flawed original version of this hymn a fine and lasting text has been shaped. It now focuses on the all-encompassing mercy and love of God rather than on what William Faber headed “The Divine Call”.

The six verses of the current version speak of God’s “plentiful redemption” and “grace for thousands / of new worlds as great as this”:

For the love of God is broader
than the measure of the mind;
and the heart of the Eternal
is most wonderfully kind.

These words draw upon the Old Testament's Book of Job 11:7-9 and the spirit of the last five chapters of the book. They also chime closely with John Wesley’s insistence that God’s grace is universally available to every human being, which Charles Wesley also asserts in his hymn Come, sinners, to the gospel feast (StF 401):

Let every soul be Jesu’s guest;
you need not one be left behind,
for God has called all humankind.

The original version of Faber’s hymn, published in his collection Oratory Hymns (1854), began with the words “Souls of men, why will ye scatter / Like a crowd of frightened sheep”. (This verse is found in the 1933 Methodist Hymn Book, #318). In Songs of Praise Discussed, Percy Dearmer says that this sentimental imagery “spoilt this otherwise altogether praiseworthy hymn”. He goes on: “By beginning, as several collections have done, with ‘There’s a wideness’, we may give an impression of universalism that was not in [Faber’s] mind, but at least we have an impressive and coherent hymn.”

Also see Ruth Duck's hymn God, how can we forgive when bonds of love are torn? (StF 613) 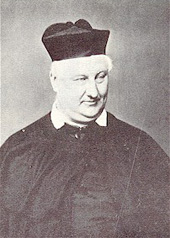 Frederick William Faber, a Yorkshire man, was born in 1814. He ended life as a devout Catholic but, as an Anglican and while Fellow of University College, Oxford, he had published The Ancient Things of England, vindicating the position of the Church of England over and against the “Roman Church”. He later became rector of Elton, Huntingdonshire, for three years. However, in 1845 he followed the example of Henry Newman and entered the Roman Catholic Church. 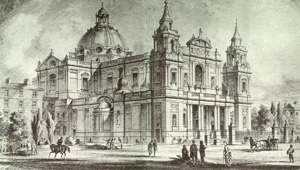 Herbert Gribble's design for the Oratory in the Brompton Road, London

Like Newman, Faber moved to Birmingham and there formed a community called ‘Brothers of the Will of God’. In 1848 this brotherhood joined Newman’s own Oratory of St. Philip Neri and, in 1849, Faber established a branch of that order in London. This branch developed into the Brompton Oratory.

Faber's faith development is reflected in the titles he gave to his volumes of hymns, for which he is now best remembered: Jesus and Mary, or Catholic hymns for singing and reading (1849) and Oratory Hymns (1854), in which the verses of There’s a wideness first appeared. Eight of his hymns, often with a fervently personal character, were included in the 1933 Methodist Hymn Book. They include “Faith of our fathers, living still / In spite of dungeon, fire, and sword” and “My God, how wonderful thou art, / Thy majesty how bright!”.

William Faber was the great-uncle of Geoffrey Faber, co-founder of the publishing house that later became "Faber and Faber", a major publisher of both literary and religious works.