A hymn for Aberfan

On 21 October 1966, a coal waste tip overlooking the village of Aberfan, destabilised by rain water, slid and crashed down into Pantglas Junior School, destroying most of the school as well as a farm and twenty houses. The avalanche killed 144 people including 116 children. It’s the worst disaster involving children in modern British history.

The Revd Gareth Hill’s hymn, “God who knows our darkest moments”, was written for personal reasons. Gareth’s father-in-law, the Revd Irving Penberthy, now a supernumerary minister in Okehampton, Devon, is the only surviving church leader from those who were ministering in Aberfan at the time of the tragedy. See below for more information. 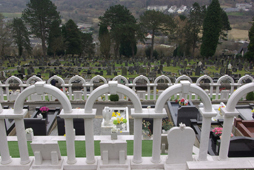 God who knows our darkest moments
meets us in our brokenness:
walks beside us as a whisper,
holds our pain in his caress.
God, who leads through shadowed valleys,
where death’s bleakness dims our sight,
speaks a peace beyond our knowing,
floods our anguish with his light.

Far beyond our grief’s horizon,
as Creation holds its breath:
Love Divine, revealed in Jesus,
tears apart the chains of death.
Servant son and humble healer,
by your cross and life laid down
you have carried all our suff'ring
and you wear the victor's crown.

Lift us up, now, risen Saviour
to the place where mercy plays,
where our broken hopes and heartache
find their healing in your gaze.
This is love, that God has saved us!
This is love, that Christ has died!
We rejoice that love has conquered
and has drawn us to your side. 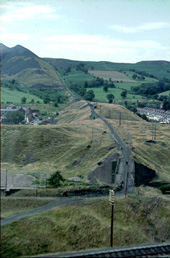 The tramway that took waste from Aberfan colliery to the spoil heaps high above the village © John Thorn – taken in 1964, two years before the heaps collapsed (Licensed under Creative Commons)

With the line “God, who leads through shadowed valleys” (v.1), Gareth Hill evokes both the former mining valleys of South Wales, scene of the 1966 disaster, and the unfailing presence of God as described in Psalm 23. Indeed, the opening lines, spoken quietly, have something about them of Ben E. King's intimately yearning lyric, "Stand by me".

Gareth also points out that there is a double allusion in the final verse, which images heaven both as healing place and playground - "the place where mercy plays", we hope both for the children of Aberfan and for us all.

For although this hymn arose from the memories of a specific event, it stretches beyond the singular to the general and eternal: “Love Divine, revealed in Jesus, tears apart the chains of death.” (v.2) This is a text that acknowledges personal and community grief which, in its diverse forms, affects us all at different times in our lives:

Lift us up, now, risen Saviour
to the place where mercy plays,
where our broken hopes and heartache
find their healing in your gaze.

See also David Lee’s paraphrase of Psalm 130, Out of the depths I cry to you, O Lord, set to the tune Gresford – “the miners’ hymn”, which was written to commemorate the 1934 Gresford mining disaster. 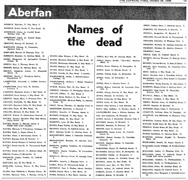 Pupils at Pantglas Junior School were just beginning their first lessons of the day when the rushing landslide of mud and debris from the nearby spoil heap – half a million tonnes of waste – flooded into their classrooms.

Some children were able to escape, but 116 were killed. Another 28 adults also died. The local community was devastated by the tragedy.

The Revd Irving Penberthy had moved to Aberfan in 1963 to minister at the English-speaking Zion Methodist Church. Gareth writes:

“The Methodist Sunday School was devastated and Irving spent months working with the community to support the families: recording an LP, funding a new youth centre alongside the chapel and administering a fund of donations from Methodist people all over the world. Part of his immediate work included accompanying parents at an emergency morgue as they identified their children.”

Irving Penberthy was invited to speak at the 50th anniversary memorial service in 2016 and Gareth’s hymn was written for that service.

Irving recalls the disaster and his ministry in Aberfan in a sequence of four Youtube videos. Further memories can be read on the BBC's On This Day page.