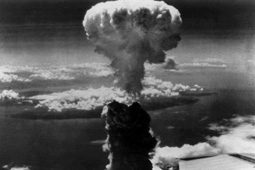 Hiroshima Day is marked every year on 6 August, the day in 1945 on which the United States dropped an atomic bomb on the city of Hiroshima in Japan. Our article Hiroshima - the fallout provides more detail about the events of that day, with links to additional resources for reflection and worship.

The event Hiroshima Day marks raises some of the most profound of human questions. About:

Are there hymns in Singing the Faith and on the StF+ website that help us reflect on these issues?

We may wish to begin with finding ways to express our continuing horror at the suffering of many thousands of Japanese citizens one Monday morning as they began the week’s work.

A bloodied child foreshadowed by a cross (website only) is one of Andrew Pratt’s most powerful recent hymns, written in response to the photo of a little boy rescued from a bombed building in Allepo. The response Andrew evokes speaks as much to our vision of a destroyed city as to the cries of a single child:

How long, O Lord we cry, each hollow word,
our pleas of peace increasingly absurd?
Good God, forgive us when inaction’s voice
speaks loudly of our violent, hurtful choice. 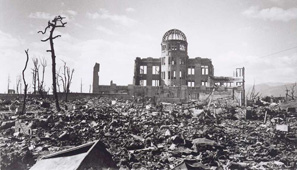 Extending our understanding of what happened at Hiroshima into the still wider context of how we steward God’s creation (thoughts here, also, of Chernobyl and other nuclear disasters), few have phrased our relationship with the earth better than Fred Pratt Green: God in his love for us lent us this planet (StF 727). He mourns the fact that “long has earth bowed to the terror of force”. Shirley Erena Murray’s Touch the earth lightly (StF 729) references her memory of France's nuclear tests in the Pacific. She places this within a broader response to our unforgiving disregard of the world’s natural resources:

Touch the earth lightly,
use the earth gently,
nourish the life of the world in our care

Issues at least as complex lie around how we respond to those who threaten us militarily; what we say about those who would take up arms, as did the pilot of the B-29 bomber over Hiroshima, or those who would take a pacifist stance. As we absorb the words of Churchill ("By God's mercy, Britain and American science outpaced all German efforts . . . We must indeed pray that these awful agencies will be made to conduce peace among the nations . . . "), we know that the whole gamut of responses to military response is present within our Christian communities. In this, our contemporary hymn writers have served us well. 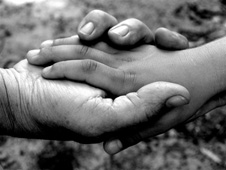 Gary Hopkins (When our views are varied, website only) speaks of the need for respectful sharing of viewpoints, noting that:

If we let division
distract from Christ’s reign,
we neglect our calling
to aid those in pain

Ian Smart invites this same response/challenge to the communion table where “‘peacemaker and peacebreaker’, soldier and pacifist, victor and victim are all welcome” (In war, in peace, website only).

For the table where bread and wine are shared is “a table of hope”. And it is hope, apparently against the odds, that Christians hold to as they express the way God wants the world to be. We not only express our vision of a transformed world where “divisions which hurt and destroy will all disappear” (Ruth Duck’s There is a new heaven; there is a new earth, StF 738); we also insist that God’s bias towards mercy encompasses the social and international as well as the personal. 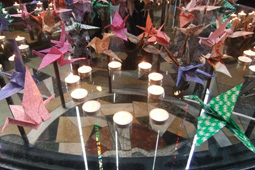 Brian Wren’s Great God, your love has called us here (StF 499), for example, helps us understand that that too often we are swept long by social forces and become “close confined” by powers and systems. These also require a form of forgiveness to precipitate healing. (As expressed perhaps by the annual communication between Hiroshima and Coventry’s civic leaders on 6 August.) It is the Christian task to help societies “turn from guilt and dull despair / and offer all that faith can do, / while love is making all things new.”

Nevertheless, by echoing the Lamb of God who takes the world’s sins away and who has barely comprehensible mercy on us (Glory, glory, glory, StF 754: There’s a wideness in God’s mercy, StF 416), the task of healing becomes personal.

Is this our response to Hiroshima – that as we proclaim God’s mercy, we seek out “a new, a perfect heart, / free from all doubt and fear at last” (Charles Wesley’s God of all power, and truth, and grace, StF 498) and find ourselves impelled to action:

The Feast of the Transfiguration

The 6th of August is also the feast of the Transfiguration (although our lectionary looks at this on the Sunday before Lent).

David Hamflett recommends to those with access to the Church of Scotland’s hymn book, Church Hymnary 4, Carl Daw’s hymn “Bright the cloud and bright the glory” (CH4 353). It places the Transfiguration and Hiroshima side by side, with the observation that “All has changed, all has changed, and we [like Jesus’ close disciples] shall never be the same.” (See also Hymnary.org)

Similarly, members of the Iona Community have produced liturgical materials that draw comparisons/contrasts between the Transfiguration and the Hiroshima event:

“For me”, says David, “it’s the contrast between the two different kinds of cloud and light of the Transfiguration and Hiroshima that makes it all so poignant, with maybe echoes of Teilhard de Chardin’s ‘Suicide or adoration?’ question: ‘humanity is being taken to the place where it will have to choose between suicide and adoration’.”