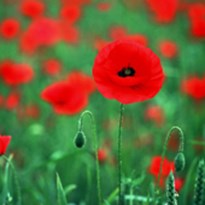 Singing the Faith includes a handful of hymns that are of particular value when planning a Remembrance Service on or near 11 November. They are not the only hymns that may be used, nor were they necessarily written for such an occasion – but their words may help us express some of the thoughts and concerns uppermost in such a service.

From the Times and Seasons section of Singing the Faith, three texts:

Marjorie Dobson’s By a monument of marble, or a simple wooden cross (StF 131) is especially helpful for a public, outdoor ceremony. It is set to the widely familiar tune “Scarlet Ribbons”, quickly accessible to more than regular church-goers.

In simple and direct language, Marjorie asks the basic question: “Why must factions stir up conflict?”, saying that “this eternal mystery / troubles hearts and stirs the conscience, / urges us to think again…” The hymn ends with a prayer:

God, we need your help and guidance
in our constant search for peace.
Move us on to new solutions
as we pray that wars may cease.

With its steady, stoic but ultimately uplifting tune, “St Anne”, Isaac Watts’ O God, our help in ages past (StF 132) needs no introduction. A paraphrase of Psalm 90, verses 1-5, it is full of evocative phrases, including the verse that might have been written to be sung over the dead of The Somme or Passchendaele:

Time, like an ever-rolling stream,
bears all its sons away;
they fly forgotten, as a dream
dies at the opening day.

First published in The Psalms of David (1719), Watts’ paraphrase was entitled, “Man frail, and God eternal”. Two verses from the original that especially reflect the idea of faril humanity are omitted from all modern hymn books. One begins, “The word commands our flesh to dust – ‘Return, ye sons of men’…” and the other uses the image of withering flowers in the field.

John Bell and Graham Maule’s To be a soldier (StF 133) was written in memory of George Macleod, the pacifist founder of the Iona Community, whose “Rule of the Iona Community” was nevertheless entitled “Mile Christi” - “because we are engaged in a battle”. That paradoxical image of a fighter for peace runs through the hymn: “To be a soldier, / to fight for peace till war shall end: / this is the conflict / Christ calls you to attend.” Verse 3 describes what such a soldier’s commission looks like, echoing, in one line, the prophet Isaiah, quote by Jesus in Luke 4:18

It calls for courage
to bring the poor release,
to enter politics praying
and break rank obeying
the power and Prince of Peace

These sentiments (and the Luke passage in particular) are picked up in StF 404, God’s spirit is in my heart.

Fred Kaan was another writer much concerned with issues of peace and justice. His hymn God! As with silent hearts we bring to mind (StF 698) is forthright in its condemnation of war – “hate and war diminish humankind” – but sensitive in its recollection of “the lives of those who gave and give their all”.